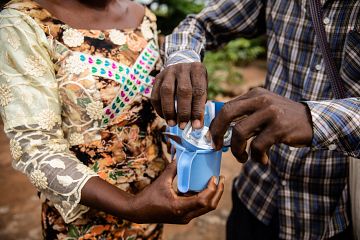 Malaria Consortium is drawing on its extensive experience delivering seasonal malaria chemoprevention (SMC) in the Sahel region of Africa, and its expertise in designing and implementing cutting edge research, to establish if SMC can be similarly effective in reducing malaria incidence in children under five in regions outside of the Sahel, where malaria transmission is seasonal. This project will complement research already being undertaken by Malaria Consortium in Mozambique.

The study aims to assess the feasibility, acceptability and protective effect of SMC in two districts in Karamoja, a region in the north east of Uganda that has experienced the highest malaria prevalence in the country for over a decade. Malaria Consortium anticipates reaching an estimated 65,000 children aged 3-59 months with SMC, which will be delivered door-to-door by Village Health Teams between May and September 2021 to coincide with the region’s rainy season.

Malaria is the leading cause of death and illness in Uganda and accounts for close to 30 percent of all inpatient deaths among children under five years of age, according to figures in the Uganda Malaria Reduction Strategic Plan (UMRSP) 2014-2020.[i] Efforts to reduce the transmission and impact of malaria have intensified over the past 10 years with increasing coverage of malaria control interventions such as long-lasting insecticidal nets (LLINs), indoor residual spraying (IRS) and treatment of malaria cases with artemisinin-based combination therapy (ACTs). Despite these efforts, malaria prevalence in some areas, such as the Karamoja region, remains well above the UMRSP target of seven percent.

SMC has demonstrated effectiveness in the Sahel region of West and Central Africa. Recent research published in The Lancet. highlighted findings from ACCESS-SMC, a partnership led by Malaria Consortium which supported National Malaria Control and Elimination programmes in seven countries to reduce the burden of malaria in children under five. It is particularly effective in this region because malaria transmission is highly seasonal (approximately four months of the year) and because of relatively low resistance to the two antimalarial drugs used in SMC – sulfadoxine-pyrimethamine (SP) and amodiaquine (AQ). SMC has not previously been tested in Uganda because of reported higher resistance to SP in the region that could impact the intervention’s effectiveness. However, there is now growing consensus that SP may retain its protective effect even in areas where resistance is high.

This study aims to address this knowledge gap and proposes to investigate the feasibility, acceptability, safety and protective effect in terms of SMC using SPAQ in Karamoja region in Uganda.

“This study is an important next step towards better understanding the scope of SMC as an effective intervention outside of the Sahel region and sits alongside a similar study we are undertaking in Mozambique to provide the research-based evidence needed to inform decision-making and policy change. Should SMC prove to be both an appropriate and effective intervention in areas of East and Southern Africa it will bolster existing interventions to further reduce ill health and death from malaria in children under five years of age.”  Christian Rassi, Programme Director – SMC and Multi-country Programmes, Malaria Consortium.

As a leading global implementer of SMC, Malaria Consortium is committed to adapting its established SMC implementation model to the local context and support Uganda’s NMCP in their work towards malaria elimination in the country. Results of this SMC study will inform future SMC policy and practice in Uganda, in particular the coverage and quality, the acceptability of SMC to beneficiaries, implementers and policy makers, and determining the effectiveness of SMC in reducing malaria morbidity among children 3–59 months. The research will also be relevant for other countries in East and Southern Africa where SMC may be a suitable malaria prevention strategy.