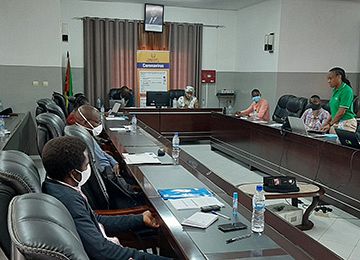 Mozambique’s Ministry of Health officials met with staff from Malaria Consortium at a kick off meeting to launch an exciting new research study that could see further gains made towards malaria elimination in the country.

Malaria Consortium is drawing on its expertise in designing and implementing cutting edge research to establish if seasonal malaria chemoprevention (SMC) – a highly effective intervention to prevent malaria in children under five, which is currently being delivered in the Sahel region of Africa – can have similar results in countries like Mozambique.

The study aims to assess the feasibility, acceptability and protective effect of SMC in Nampula province, in the north of Mozambique and will be implemented in partnership with Mozambique’s National Malaria Control Programme (NMCP) and Centro de Investigação em Saúde de Manhiça. Malaria Consortium anticipates reaching an estimated 72,000 children aged 3-59 months with SMC, which will be implemented between November 2020 and February 2021 to coincide with the region’s rainy season.

In the Sahel, SMC has been proven as a safe, cost-effective and feasible intervention that can prevent up to 75 percent of malaria cases in under-fives. It is particularly effective in this region because malaria transmission is highly seasonal (approximately four months of the year) and because of relatively low resistance to the two antimalarial drugs used in SMC – sulfadoxine-pyrimethamine (SP) and amodiaquine (AQ).

According to the World Health Organisation (WHO) world malaria report 2018, Mozambique has the third highest number of malaria cases anywhere in the world. The disease is the leading cause of death in a country of around 30 million people. Malaria transmission levels vary across Mozambique, with a significantly higher prevalence in central and northern regions, where malaria transmission peaks during the rainy season. SMC has not previously been tested here because a reported higher resistance to SP in the region may impact the intervention’s effectiveness. However, there is now growing consensus that SP may retain its protective effect even in areas where resistance is high.

As a leading global implementer of SMC, Malaria Consortium is committed to adapting its established SMC implementation model to the local context and support Mozambique’s NMCP in their work towards malaria elimination in the country.

“We’re excited to be working on this project – it’s the first time SMC will be piloted outside of the Sahel region. This could provide the foundation for successful SMC campaigns rolled out in countries beyond West and Central Africa. We’re grateful for the support of the Ministry of Health and other partners, it’s an exciting time for everyone.” Maria Rodrigues, Mozambique Country Director, Malaria Consortium.

Results of this SMC study will be available by August 2021 and will inform future SMC policy and practice in Mozambique, in particular the coverage and quality, the acceptability of SMC to beneficiaries, implementers and policy makers, and determining the effectiveness of SMC in reducing malaria morbidity among children 3–59 months. If successful, subsequent research could provide a more comprehensive assessment of the intervention’s effectiveness and sustainability. The research will also be relevant for other countries in East and Southern Africa where SMC may be a suitable malaria prevention strategy.

Read a synopsis for this research project.