Where we work / Nigeria


Statistical data obtained from DESA, UNDP, UNICEF, UNAIDS and WHO

Critical funding from the UK’s Department for International Development resulted in the establishment of the £50 million Support to National Malaria Programme (SuNMaP) in Nigeria.

SuNMaP is being implemented by a Malaria Consortium-led partnership of international and national companies and non-governmental organisations. The project is being implemented in six states – Lagos, Kano, Anambra, Ogun, Katsina and Niger States, with national headquarters in Abuja also providing support at the federal level.

The programme is offering Nigeria the technical expertise and experience it needs for a comprehensive fight against malaria.  It supports a pluralistic approach that, in addition to strengthening government capacity to lead and manage malaria control interventions, prepares Nigerian commerce and civil society for their long-term role of tackling malaria in the country.

As a part of a larger $1 billion-plus global partnership, SuNMaP works with the National Malaria Control Programme to harmonise donor efforts and funding agencies around agreed national policies and plans geared towards key targets of the Global Malaria Action Plan.

Its expected outputs are:

It was Malaria Consortium’s lead role on the SuNMaP project that spurred the organisation to start operations in Nigeria in 2008. Malaria Consortium was keen to engage in a country responsible for 25% of all cases of malaria in Africa. The organisation had contributed significantly to the Roll Back Malaria needs assessment early in 2008, prior the start of SuNMaP project. Since then, seven offices (one in the capital Abuja and one in each of the six supported states)  have been in charge of implementing SuNMaP project. After having built a strong foundation for the success of SuNMaP, Malaria Consortium hopes to diversify its operations in Nigeria.

Based on early findings, the programme has developed strategies around key issues and has started planning and rolling out its interventions. This includes support to the development of state malaria control plans including communication strategies, development of malaria-related capacity-building materials and training. A monitoring and evaluation framework has been finalised to follow project progress during the five years of the programme.

After having contributed significantly to the drafting of the new National Malaria Strategic Plan, SuNMaP has been actively engaged in donor forums, strongly advocating for more coordinated partner efforts.  SuNMaP has also principally been involved as a technical lead (in collaboration with a World Bank-funded consultant) in supporting the National Malaria Control Programme to develop a national plan and set of standard operating procedures for LLIN coverage scale-up through mass distribution campaigns. It has also played a critical role in the coordination and implementation of the first two net campaigns covering a Northern and a Southern State. Surveys are being organised to ascertain net ownership and usage rate post campaign in these two states, the results of which will inform any improvement required for the extension of net campaigns to other states.

SuNMaP so far has: 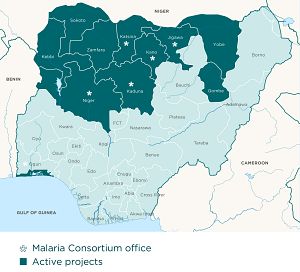