WHO recommends RTS,S/AS01 malaria vaccine for children in sub-Saharan Africa 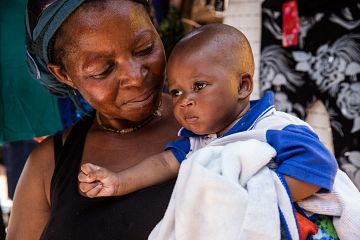 Today, the World Health Organisation (WHO) announced that there is evidence to recommend that the RTS,S/AS01 malaria vaccine should be provided to reduce malaria disease and burden in children living in sub-Saharan Africa. This recommendation followed a WHO-coordinated large pilot implementation project in Ghana, Kenya, and Malawi, where 2.3 million doses have been administered since 2019, with over 800,000 children receiving at least one vaccine dose.

The recommendation, approved by the global advisory bodies for immunisation and malaria – the WHO Strategic Advisory Group of Experts on Immunization (SAGE) and the WHO Malaria Policy Advisory Group (MPAG), was dependent on full evidence review for feasibility, safety and impact. The RTS,S/AS01 vaccine had previously been evaluated in a large Phase 3 trial that showed that the RTS,S/AS01 vaccine was efficacious and received a positive regulatory assessment from European Medicines Agency. However, a number of safety uncertainties needed to be resolved in order to assess the advisability of introducing the RTS,S/AS01 vaccine for routine use.

The questions that were addressed in the pilot implementation study included an assessment around the following:

The findings from this malaria vaccine pilot implementation project showed the following;

“The recommendation is a milestone because it recommends the routine use of a malaria vaccine for the first time in history. The vaccine should be seen as a new and complementary tool in accelerating and sustaining progress along the continuum to malaria elimination. In particular, it adds to the combination of interventions that are essential to preventing children from the devastating effects of malaria infection and malaria disease. We believe that the vaccine will be most effective when used in combination with the existing mix of proven malaria interventions, including seasonal malaria chemoprevention (SMC), long lasting insecticide nets, parasite-based diagnosis and case management,” said Dr James Tibenderana, Malaria Consortium’s Technical Director.

Further research into the uses for the RTS,S/AS01 vaccine is ongoing, demonstrated by the recently published New England Journal of Medicine paper on seasonal vaccination and SMC. This provided evidence for the consideration for alternative seasonal options of providing the RTS,S/AS01 vaccine in settings with highly seasonal malaria transmission, in addition to the routine vaccination recommended in settings with perennial malaria transmission.