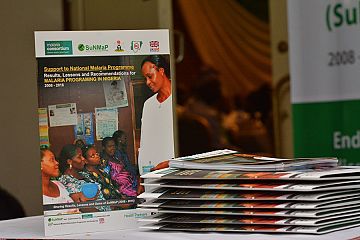 Literature at the SuNMaP end of project event in Abuja

As the lead implementing partner of the Support to National Malaria Programme (SuNMaP), Malaria Consortium submitted written and verbal evidence to the IDC’s inquiry on DFID’s programming in Nigeria. SuNMaP has been ‘widely regarded as a success’ in both reducing cases of malaria and strengthening Nigeria’s health systems, according to the document.

Accounting for nearly one quarter of cases globally, Nigeria’s malaria burden is among the most acute in the world and is a key contributor to the country’s low overall health indicators. Reducing the burden of malaria on Nigeria’s health system is vital to achieving the global health objectives of the Sustainable Development Goals, making the success of SuNMaP especially significant.

SuNMaP was an £89 million, eight-year long project funded by DFID to support Nigeria’s National Malaria Elimination Programme (NMEP). It was led by Malaria Consortium in partnership with GRID Consulting and Health Partners International and ran from 2008 to March 2016. SuNMaP was effective in saving an estimated 48,000 lives that would have been lost to malaria, but crucially it also used malaria as an entry point to strengthen the wider health system across the 10 states where it was implemented.

As part of Malaria Consortium’s contribution of evidence to the IDC’s inquiry, Senior Technical Adviser Dr Prudence Hamade said SuNMaP “had a very novel approach in the sense that it was done entirely through the federal and state government programmes”, the success of which had knock-on effects in building the capacity of wider health systems.

The report highlights SuNMaP’s success in ‘effectively connecting research communities with government decision makers’. The IDC recommends that DFID invests in strengthening relationships between research bodies and political authorities to ensure programmes are based on strong evidence and are delivered effectively. Malaria Consortium endorses this recommendation, both for Nigeria and more widely.

According to the IDC, long-term strategic funding is vital to maintain and improve progress in not only health but economic development, gender equality and governance. Malaria Consortium values DFID’s commitment to health in Nigeria, and we believe that its continued participation is essential to ongoing success in reducing the burden of ill health on the country.  We echo the IDC’s call on the UK Government to continue its vital support to Nigeria, particularly with respect to malaria and child health, and to outline its intentions for strategic funding in the coming years.

The full report, DFID’s programme in Nigeria: Second Report of Session 2016–17 is available to download from the International Development Committee's website.