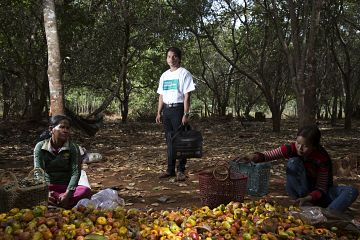 Countries in the Asia Pacific region have done extremely well in achieving impressive levels of malaria reduction, but many still face the challenge of residual malaria. In the Greater Mekong Subregion, this largely occurs within remote forested areas, among forest-goers and mobile populations, where transmission happens outdoors and interventions like insecticide-treated nets and indoor residual spraying are not effective. In addition, the itinerant lifestyle and limited access to health care services for these groups means achieving full coverage of interventions is much more difficult.

The Greater Mekong Subregion poses a particular threat in that it is the core area where drug-resistant Plasmodium falciparum has emerged. The pressure is therefore to work at pace to eliminate P. falciparum malaria in the region and prevent it reaching Africa – where the overwhelming majority of the world’s malaria cases are.

In the latest webinar in a series hosted by the Asia Pacific Malaria Elimination Network (APMEN), moderator Dr Leo Braack, Senior Vector Control Specialist at Malaria Consortium in Bangkok and technical lead of the APMEN Vector Control Working Group (VCWG) was joined by experts and participants from 44 countries around the world to discuss what can be done to close the gap on this final frontier of malaria elimination.

Dr Braack opened the webinar highlighting the prevailing challenges. “Now we’ve reached that final mile, that last bridge when long‐lasting insecticidal nets and insecticide resistance management strategies are no longer sufficient to bridge the gap. That is our challenge. The question to be asked is, what are the contributory factors to residual malaria so that we can get rid of that final percentage? It’s not just about the tools we’re using but about adapting programmes and securing funding to make it happen.”

As part of the four-year Regional Artemisinin Initiative 2 Elimination (RAI2E) project in northern Cambodia, Malaria Consortium has looked at exactly this – how a flexible approach to programme delivery can be adopted to ensure early detection and delivery of targeted interventions for vulnerable groups. Between December 2015 and December 2019, we trained mobile malaria workers to diagnose and treat malaria among mobile and migrant populations in remote and forested areas in northeast Cambodia, as part of efforts to accelerate P. falciparum elimination in Cambodia.

By continually applying evidence, operational experience and local knowledge to project delivery, tailored early diagnosis and treatment interventions have contributed to increased access to health care services among mobile and migrant populations, a decrease in P. falciparum malaria that is detectable via a rapid diagnostic test to almost zero and efficiently inversing the P. falciparum and mixed/P. vivax case ratio. Read more about the project’s successes in our briefing note.

A recording of the webinar is available below.