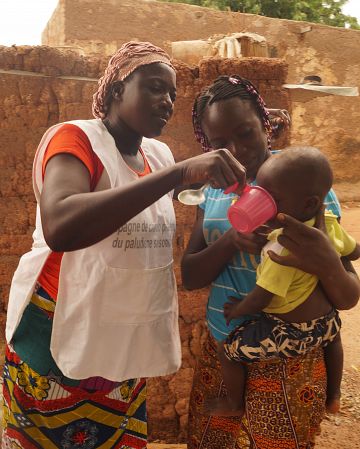 Malaria Consortium is delighted to receive continued support from Good Ventures, through Open Philanthropy, for its seasonal malaria chemoprevention (SMC) programme. This support means Malaria Consortium is able to continue to contribute to closing gaps in coverage of SMC in eligible areas and plan with confidence for the next 2-3 years. The $27 million grant follows a recent GiveWell evaluation and recommendation, for the fifth year running, that Malaria Consortium’s SMC programme is highly effective and averts deaths.

Malaria Consortium’s SMC programme focuses on preventing malaria in children under the age of five, during the rainy and transmission season (normally July to October), in eligible countries of the Sahel region of Africa. These children are the most vulnerable to the disease and death as a result, and most illness and death occurs during the season. SMC involves administering four monthly courses of antimalarial drugs during the period of highest risk.

Malaria Consortium’s SMC programme has now expanded to Nigeria, Burkina Faso, Chad and Togo, with a new study exploring its feasibility and impact outside of the Sahel for the first time recently launched in Mozambique and there is some pressure growing, in light of climate variability and change in season length, to further expand the intervention.

Malaria Consortium has been a leading implementer of SMC since WHO issued its recommendation to scale up the intervention in 2012 and has continued to deliver SMC in a COVID-19-secure way during the pandemic and in line with government strategies. Between 2012 and 2019, the number of children protected from malaria with SMC, in sub-Saharan Africa, has risen from 0.2 million to 21 million.  Despite disruptions caused by the pandemic, Malaria Consortium’s SMC programme reached over 12 million children in 2020, with half funded through philanthropy.