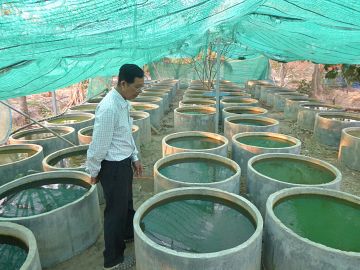 Malaria Consortium has demonstrated the effectiveness of a novel yet low-cost and home-grown solution to dengue control that has the potential for wide scale application in Cambodia. This is great news for a country that has one of the highest per-capita dengue incidence rates in Southeast Asia, with almost 200,000 dengue cases reported between 1980 and 2008.

At a workshop in Phnom Penh today, Malaria Consortium revealed to an audience of public and private sector representatives, donors and non-governmental organisations, that the approach investigated during the study period has shown a high level of effectiveness in helping to reduce dengue vector population. The project uniquely combined and compared three interventions to reduce the dengue burden in one sustainable solution: guppy fish, a larvicide and behaviour change communications.

The study took place in Kampong Cham, a province with one of the highest dengue incidence rates in Cambodia. Mosquitoes commonly breed in standing water near households and the use of guppy fish has proved to be very effective in reducing larvae in large water storage containers because they eat the larvae. For smaller containers where guppy fish cannot be used, Malaria Consortium trialled a long lasting controlled release larvicide – a biological control method - which prevents the emergence of the adult mosquitoes.

Both these vector control methods were used alongside a behaviour change strategy, central to which has been effective training of community health volunteers to be able to engage their peers in healthy behaviours. At the end of the study, focus group discussions and in-depth interviews with community members, volunteers and health centre staff revealed that the project has increased the community participation in dengue control. Surveys showed that the number of dengue mosquitoes per household was significantly lower in areas where the three interventions were implemented.

“This study fills the knowledge gaps needed for scale-up and for the sustainability of a dengue control programme,” said Yves Bourny, Malaria Consortium Country Director. “Our findings will now be used to provide sound, evidence-based recommendations for the Ministry of Health and the National Dengue Control Programme to support efforts to reduce the number of mosquitoes carrying the virus and to lower the burden of dengue in Cambodia.”

“I am pleased to see the study results of the integrated vector management project and to see the effectiveness of this solution to control dengue in Cambodia”, Dr HUY Rekol, Director of the National Center for Parasitology, Entomology and Malaria Control (CNM) and home to the NDCP concluded. CNM greatly contributed to study design and implementation in field activities of the study.