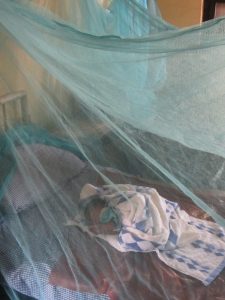 When Malaria Consortium started activities in Nigeria through the UK aid-funded Support to National Malaria Programme (SuNMaP) in 2008, one of this programme’s key activities focused on expanding the retail market for antimalarial commodities to ensure a steady supply of drugs, rapid diagnostics test kits and long lasting insecticidal nets (LLINs).

To achieve universal LLIN coverage, SuNMaP supported Nigeria’s approach of using multiple channels to distribute them into households. The programme also adopted and implemented a ‘total market approach’ when developing the LLIN market, combining LLIN distribution through all channels – private, public and communities – to drive one single market.

Throughout SuNMaP’s eight years of implementation, this approach was fine-tuned into ‘making markets work for the poor’ (M4P), contributing to Malaria Consortium’s role and reputation as a facilitator. M4P meant that the programme’s support to the commercial (retail) sector was complementing the national continuous net distribution campaign. This minimised the gradual decline in number of nets in households that received them through routine channels, such as ante-natal clinics, and free mass campaigns.

“This approach confirmed our belief that we need all channels – private, public and communities – working well together before you can achieve universal coverage,” said Dr Kolawole Maxwell, Malaria Consortium Nigeria Country Director.
During SuNMaP, Malaria Consortium continuously checked the market, carrying out biannual surveys on people’s malaria prevention practices, and retail outlet surveys on which nets were being sold, price and shape/colour preferences. All net manufacturers received the findings from these surveys. 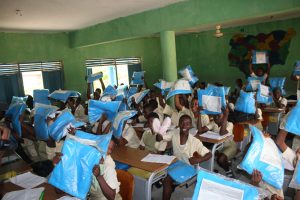 “By sharing this evidence with everyone, Malaria Consortium kept its position as an objective player. We just wanted the market to grow,” Dr Maxwell explained. “We also helped distributors bring costs down by holding campaigns to boost Nigerians’ awareness of the importance of buying and using mosquito nets. This naturally resulted in increased retail sales.”

When Malaria Consortium received a two-year extension for SuNMaP from UK Aid, the organisation was able to apply one of the key lessons learnt from the previous years of operation: that manufacturers’ support is crucial for developing the local LLIN market. However, the common held belief was that this type of tailored retail market, with its regular leaks, would not interest an investor. Nor would manufacturers want to make nets of a specific shape or colour, despite these preferences being demonstrated by the SuNMaP’s surveys; they would feel demand was too small for their production lines.

Malaria Consortium Nigeria decided to send out a letter to net manufacturers regardless, encouraging them to take a chance on the local market. A turning point was reached when one company came back and accepted the challenge – TANA Netting.
Through SuNMaP Malaria Consortium helped to facilitate TANA Netting’s partnership with the public and private sectors, from the National Malaria Elimination Programme of the Federal Ministry of Health and the Ministry of Finance to local cutting, sewing, packaging and brand companies (Rosies Textile Industries and Prezzo Medicals). 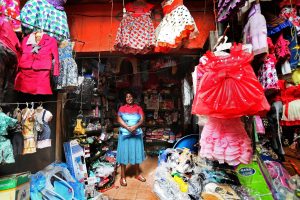 SuNMaP ended in 2016, but the strategy has paid off. Earlier this year, the Nigerian Minister for Health unveiled the first LLINs made in Nigeria by TANA netting on World Malaria Day. Now TANA Netting is planning to produce nets for the retail market and once its capacity is up and running, it will be easier to produce different shaped and coloured nets to meet those specific preferences.
“We are delighted. The driving force of SuNMaP and its partners, we have successfully engaged the private sector, provided them with the right capacity building and support and now they are getting on with it. This is sustainability in action!” Dr Maxwell concluded.