My name is Mark Clark and I recently joined the Board of Trustees of Malaria Consortium. My interest in tropical diseases stretches back to a formative summer placement in the early 1980s as a biochemistry undergraduate at Colombo University, Sri Lanka. It was there I first observed the devastating effects of malaria and lymphatic filariasis. Thirty years on and I am delighted to have the opportunity to crystallise this long-held interest at Malaria Consortium, an organisation which makes such a difference to so many lives across Africa and Asia.

Among my first requests on joining the Board was to participate in a field visit so that I could become better informed about Malaria Consortium’s ‘on the ground’ activities. Helping to provide fiduciary oversight and governance is very rewarding in itself but of course there is no substitute for seeing the valuable work of the organisation ‘in action’.

Nigeria currently carries the highest burden of malaria of any country globally and is Malaria Consortium’s single largest funding recipient; it was an obvious choice for a visit. The country team, based in the capital Abuja and headed by the exuberant and inspiring Country Director, Dr Kolawole Maxwell, had already provided me with an extensive itinerary. This comprised a series of counter-party and partner meetings and a trip to Niger state to view one of the most innovative programmes for integrated childhood care, known as RAcE (Rapid Access Expansion).

What was immediately striking from the meetings with Government and State officials, donors and partners, was the esteem with which Malaria Consortium is held in Nigeria. It is seen not only as a key partner in the fight against malaria and other childhood diseases but as one of – if not the – key drivers of innovation and access to care in what is a complex and often difficult healthcare environment.

As an observation at this point, my 30-plus year business career prior was filled with meetings where levels of scepticism between the two sides around the table was the norm – here every meeting I attended was warm, collegiate and with a shared sense of purpose. Very refreshing and very motivating!

The success of the eight-year, DFID-funded SuNMaP (Support to National Malaria Programme), which Malaria Consortium was the lead implementing partner, is widely acknowledged and appreciated. Furthermore, Malaria Consortium chairs the National Technical Working Group on Malaria and has gained a reputation for evidence based innovation in projects such as RAcE, the related iCCM (integrated community case management) activities, and ACCESS-SMC (Achieving Catalytic Expansion of Seasonal Malaria Chemoprevention in the Sahel). We are optimistic about beginning a number of new programmes in the coming year, including some major programmes in nutrition, malaria and neglected tropical diseases. 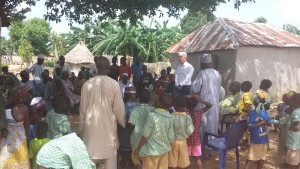 Prior to my visit to the project in Niger state, I attended a RAcE/iCCM sustainability workshop where the focus was on how these programmes could, in due course, transition from donor/NGO funding and oversight to federal/state funding and oversight. Of course, the ultimate target for Nigeria is for the government to operate an effective healthcare system for all, rendering the work of Malaria Consortium and other aid organisations unnecessary. However this can only happen in steps given the rather haphazard state of the current healthcare infrastructure, the lack of funding (Nigeria spends a low one percent of GDP on healthcare), and multiple other confounding geographic, political and social factors. It was nevertheless energising to see a group of like-minded individuals from all sides working together to devise a series of specific actions to try to ensure such a transition for RAcE/iCCM as of 2018.

Inevitably though it was the visit to the village of Butu in Paikoro, Niger state that will linger longest in my mind.

Butu is one of many villages in Niger state which benefit from Malaria Consortium’s RAcE programme, which delivers community-based diagnosis, treatment and referral of malaria, pneumonia and diarrhoea – the three biggest killers of under-fives in Nigeria. Central to the delivery of this programme are local community oriented resource persons (CORPs) who are supplied with training, educational materials and medical supplies. Their boxes contain diagnostic kits, artemisinin combination therapies (for malaria), antibiotics (for pneumonia), zinc and oral rehydration salts (for diarrhoea), and other medical necessities (e.g., sterile gloves and sharps boxes).

Our trip began with a two and a half hour drive from the state capital Minna on an increasingly pothole-ridden and near-impassable road. On arrival at Butu village (with the car’s axles thankfully intact!) we were met by the villagers and introduced to the CORP, a retired teacher. The CORP took us to his outbuilding, demonstrated the screening process for children who suffered fever, coughing, fast breathing or diarrhoea, and showed me how he logs each child in a register (which is shared regularly with supervisors in order to capture the records). In the first two weeks of October alone he had seen and treated or referred more than 20 sick children in the village, demonstrating the huge value he brings to the community – it’s truly worrying to think what would have happened had he not been available to those children, with the nearest hospital more than two hours away and with the transport difficulties I have already highlighted. 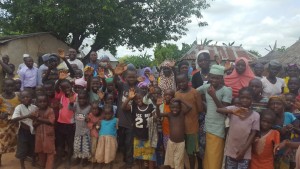 After this I was introduced to the entire village and addressed by the village head who expressed his gratitude to Malaria Consortium for operating the programme. We in turn spoke about our vision where children can grow up without the threat of disease and stressed that the villagers should support the CORP as he is their ‘best friend’ in keeping the community healthy. We were then mobbed by a group of very excited children and many photographs were taken by those villagers with cameras or mobile phones! Notwithstanding the 20 or so sick children that the CORP had to see this month, my memory is of a village teeming with healthy, happy and excitable young children and for that we must, at least in part, thank the success of RAcE. It is why Malaria Consortium does what it does and it is truly heartening.

I have learned a huge amount this week and that I will carry through to perform my role more effectively as a Trustee going forward. Of course I have mainly highlighted the positives and it would be remiss not to re-state again the challenges, which largely revolve around the poor state of current healthcare infrastructure and the relative paucity of government funding. It is imperative for the foreseeable future that Malaria Consortium and its peers remain committed and motivated in this beautiful country if we are to see our mission through.

In closing I would like to express my gratitude for the extraordinary hospitality I received from Dr Maxwell and his team in Abuja and Minna. I was particularly pleased to be presented with a colourful Nigerian national outfit which will give me a new option for ‘dress-down Fridays’! The team in Nigeria really is of the highest quality, their reputation is second to none, and I am proud that they are carrying forward the vision of Malaria Consortium with such passion and involvement.