Ownership and use of ITNs

The use of insecticide treated nets varied greatly among study sites and surveys. Usage rates among people with access to ITNs were significantly higher than overall use in the study sites – indicating that access was an important determinant of use. 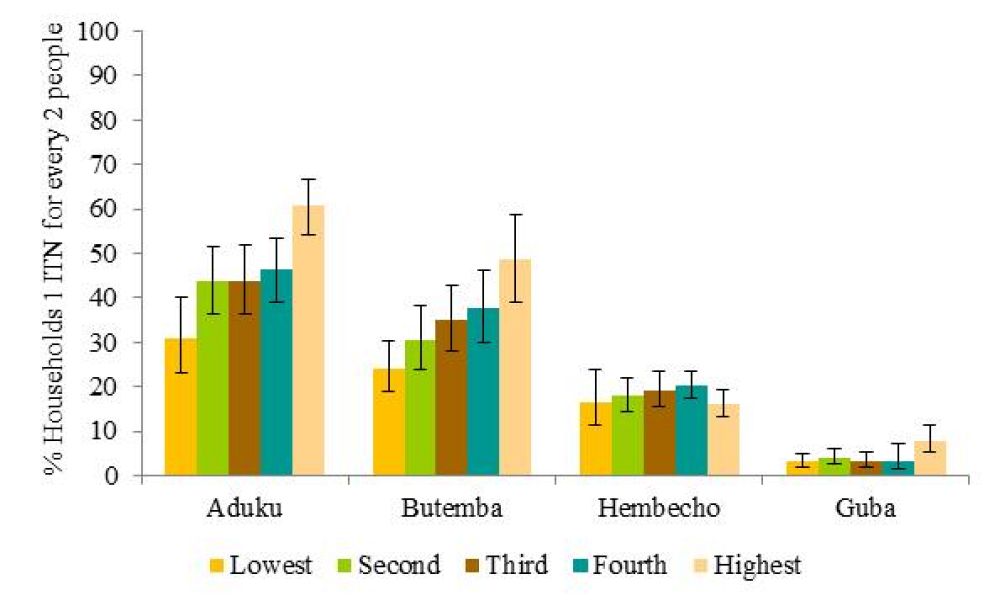 The proportion of households with enough nets to cover all residents (assuming one net for two people) was below 50% during rounds 1-3, but increased to 68% and 52% in round 4 in Apac and Butemba  as a result of a national long lasting insecticide treated net (LLIN) universal coverage campaign from 2013-14. ITN ownership increased with socio-economic status in both sites. In the Uganda sites, the majority of nets were obtained from public sources. Overall, in both Uganda sites, 99% of untreated nets and 14% of LLINs were purchased during the study period. Purchased nets were mainly obtained from open markets and shops or hawkers. The proportion of nets (LLINs and non-LLINs) purchased increased with wealth. In Aduku, overall ITN use rates increased from 48% to 72% over the 2012-14 period, and usage among people with access to the nets increased from 67% to 80%. In Butemba, overall use increased from 41% to 64% and use among people with access increased from 67% to 75% (following a decrease to 57% in 2013). In Aduku, the most frequently mentioned reasons for not using a net were that they were not hung up, that the usual user did not sleep in the house, or that the nets were too old. In Butemba, the main reasons mentioned were ‘net too old’ followed by ‘no space to hang net’.

Coverage was low in Guba, with less than 6% of households having enough nets to cover residents during the 2012-14 period. In Hembecho, 99% of households owned at least one ITN during round 1, but only a quarter of households had enough nets to cover all occupants and this decreased 9% in round 4 due to net attrition. ITN ownership increased with socio-economic levels in Guba only. In Ethiopia, almost all nets were received from public sources. In Hembecho, overall ITN use rates decreased from 69% to 16% from 2012-14, and use among people with access to  nets decreased from 72% to 45%. In Guba, overall use rates were low, and showed only a slight increase from 13% to 16%. Use among people with access also increased slightly from 26% to 34%. 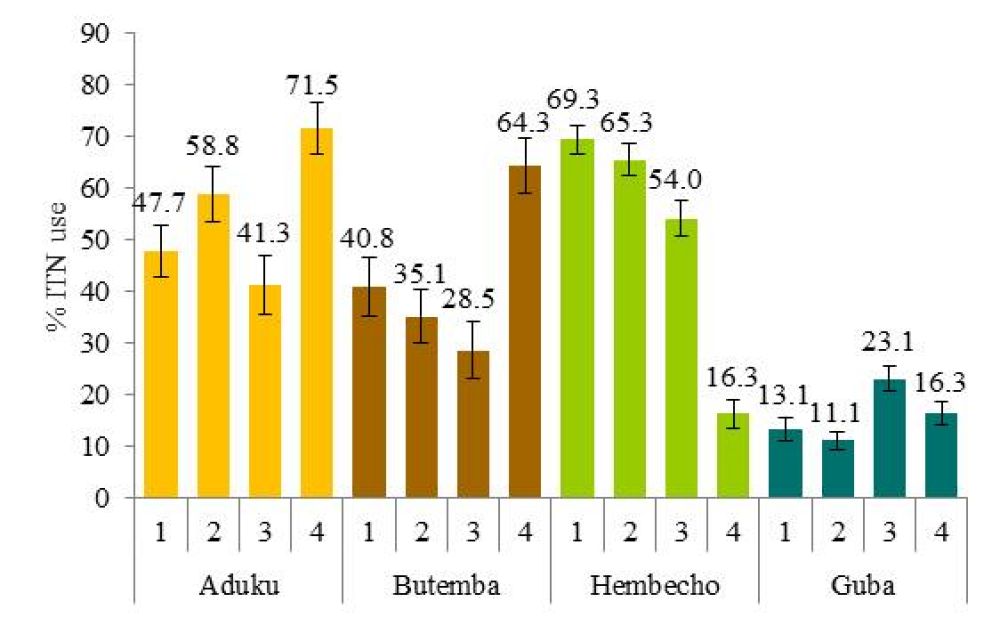 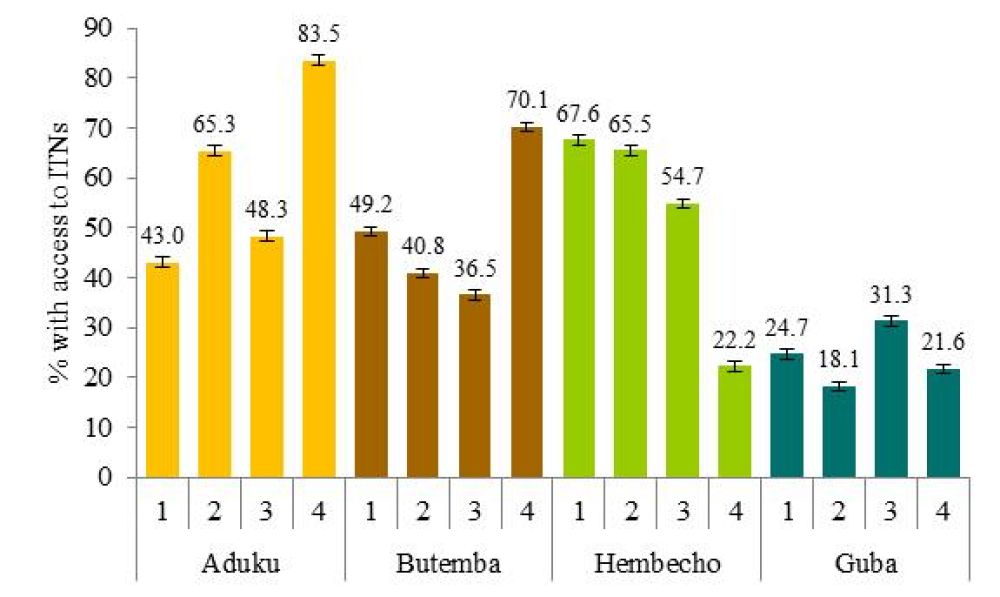 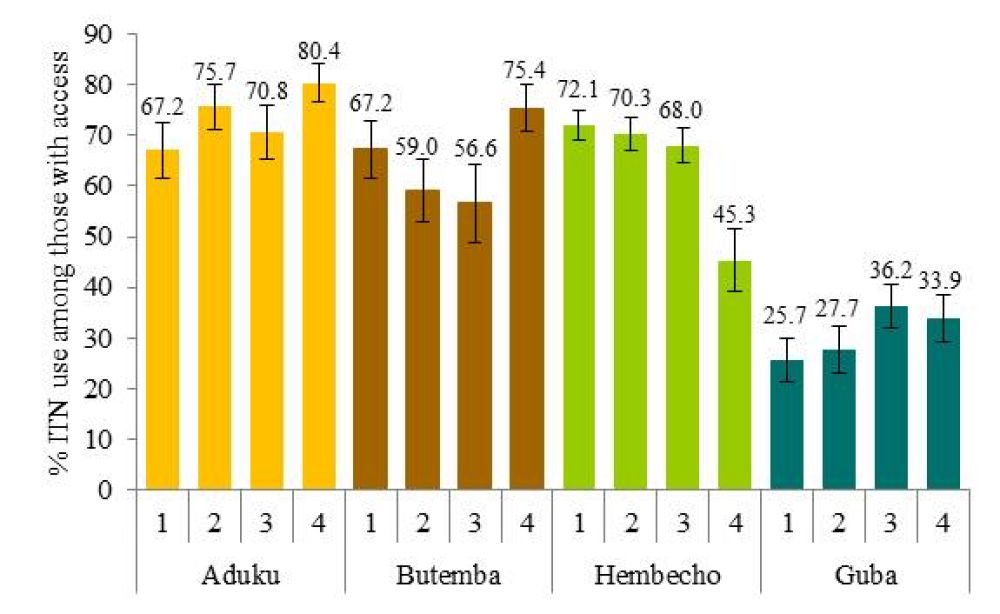 In the Ethiopia sites, nets being too old or dirty were often mentioned as reasons for not using them, and in Hembecho difficulty in hanging them up was also cited as reasons. Less

IRS was implemented in all sites except Butemba. Aduku was sprayed twice a year with bendiocarb from 2010 onwards. Guba was sprayed with deltamethrin only in 2010 and 2012. Hembecho was sprayed every year from 2010 to 2013 and twice in 2012. Deltamethrin was used until February 2012 and propoxur was used in August 2012. Coverage of spraying was estimated based on the household questionnaire, which asked respondents if their house had been sprayed in the preceding 12 months. In Aduku, spray coverage in survey rounds 1 and 2 was above the desired 80% coverage level. In survey rounds 3 and 4, coverage was 79% and 76%, respectively. In both Ethiopian sites, coverage was greater than 90% in years when IRS was implemented. 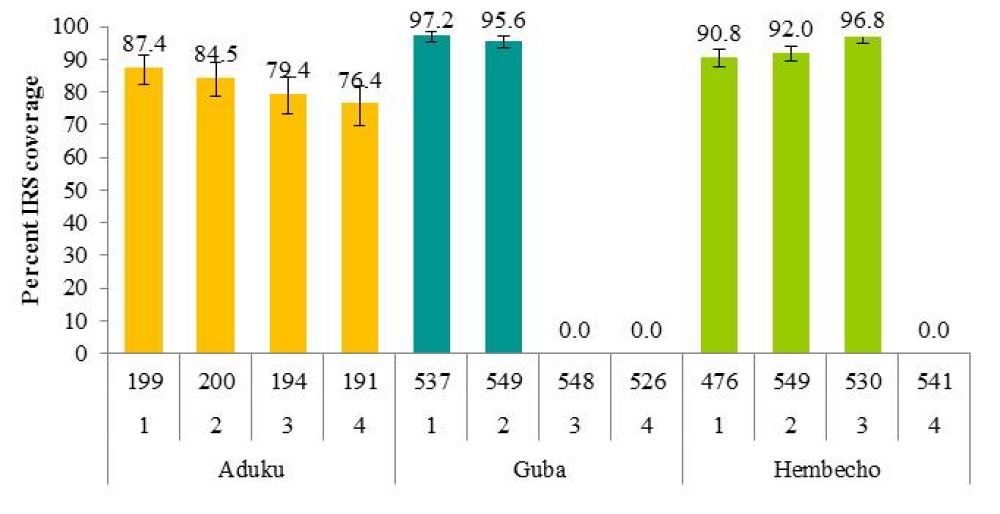