Repeated epidemiological surveys were carried out in four sites in Ethiopia and Uganda during the 2012-14 period to monitor changes in malaria epidemiology and assess the impact of interventions. Overall, malaria prevalence ranged from 0.5% in Guba (Ethiopia) to 21.1% in Butemba (Uganda). Low prevalence was observed in all sprayed sites. 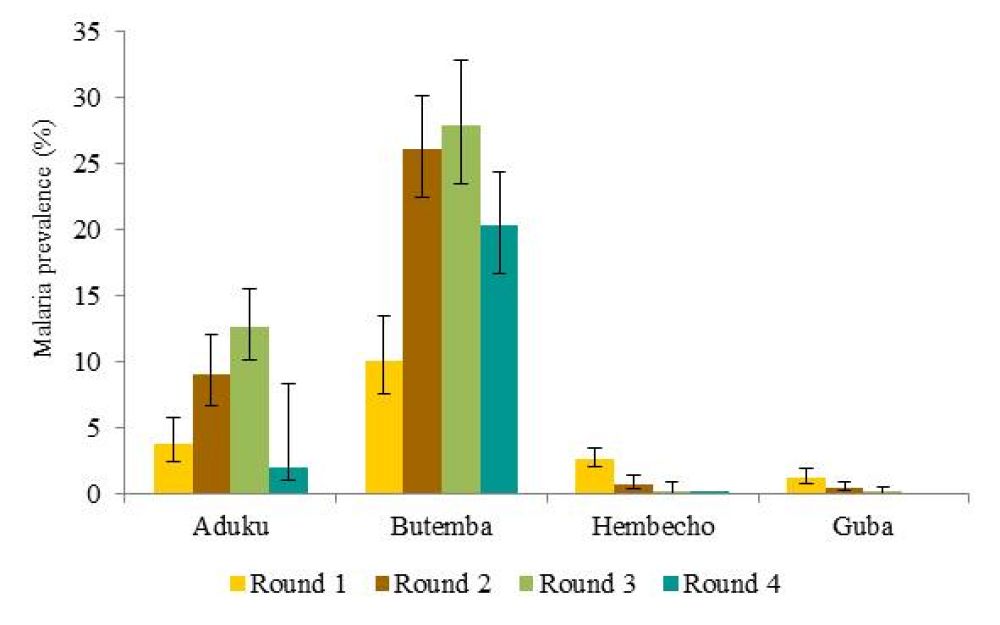 More
In Uganda, individuals who slept under an ITN had 37% and 26% less risk of malaria infection than those who did not sleep under an ITN the previous night in Aduku and Butemba, respectively. Females had a 32% and 19% less risk of infection compared to males in the two sites. Individuals from households with high socio-economic status had a 44% and 32% lower risk of infection compared with those from households with low statuses in Aduku and Butemba. In Butemba, a site with no indoor residual spraying programme, individuals who lived in a house with closed eaves had a 31% lower risk than those who lived in partially or fully open eaves. This effect was not observed in Aduku, which was under an IRS programme, indicating that there was community-level protection because of IRS. In Ethiopia, malaria prevalence was low and too few A. arabiensis vectors were collected to carry out detailed assessment of vector behaviour and insecticide resistance. 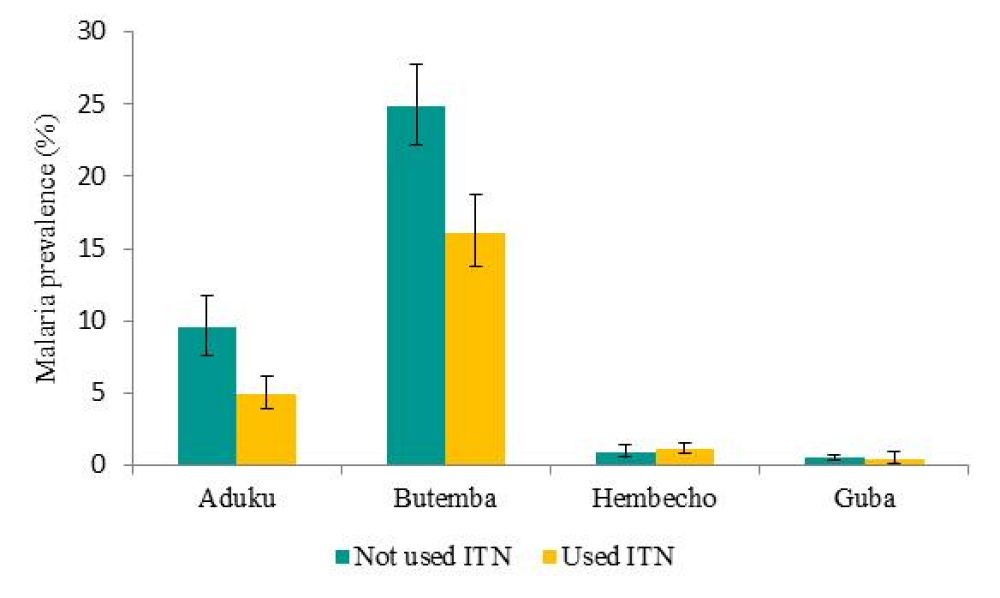 In Uganda, A. funestus s.s. was dominant in Aduku, followed by A. arabiensis. A. gambiae s.s. was collected in small number. Densities of host-seeking vectors and human biting and entomological inoculation rates decreased during the study period. Anopheles funestus s.s. fed both indoors and outdoors, while A. arabiensis and A. gambiae s.s. showed a tendency of more biting outdoors than indoors. Still, the majority of human-vector contact occurred indoors after 22.00. Both the human biting rate and entomological inoculation rate declined over time at this site. Suspected resistance of A. gambiae s.l. (mostly A. arabiensis) to bendiocarb was detected in Aduku, but no organophosphate resistance was found. A. arabiensis showed some degree of susceptibility to pyrethroids in some but not all of the tests. The frequency of kdr-L1014S mutation was extremely low in A. arabiensis. No acetylcholinesterase (ace-1 G119S) mutation was detected in both species.

In Butemba, A. gambiae s.s. was the most dominant species. Only a few A. arabiensis and extremely low numbers of A. funestus s.l. were collected. Large numbers of A. coustani s.l. were also collected in Aduku. The large majority of A. gambiae s.s. biting took place indoors after 22.00, where almost all human-vector contact took place. Host-seeking densities, human biting rate and entomological inoculation rate of A. gambiae s.s. increased during the study period. A. gambiae s.s. was found to be resistant against pyrethroids but was susceptible to organophosphates and carbamates. A high frequency of the kdr-L1014S gene mutation was observed in A. gambiae s.s. (the frequency was extremely low in A. arabiensis). The kdr gene frequency was similarly high in dead mosquitoes and survivors of the tests, indicating that metabolic resistance may have played an important role. Synergist-based tests also showed the presence of metabolic resistance. No acetylcholinesterase (ace-1 G119S) mutation was detected. 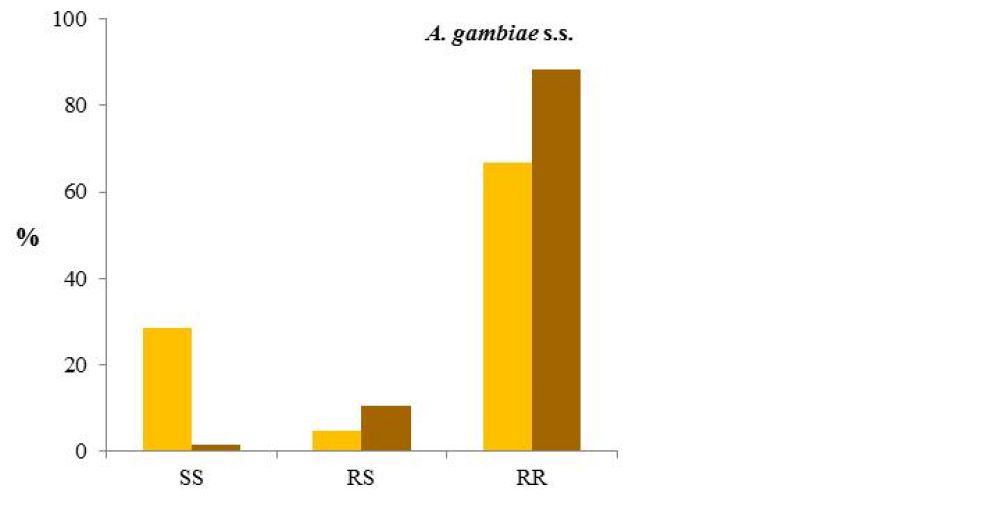 In all sites, most households had at least one ITN, except in Guba where coverage was low. Ownership increased in round 4 in Uganda as the result of the national LLIN distribution campaign. However, ownership in terms of the number of ITNs for two people was not at the required level in all sites. In Uganda, ITN ownership increased with socio-economic levels, but no such association was observed in Ethiopia. The use rates were high among people with access to nets.   The use of intermittent preventive treatment in pregnant women has increased over time in the Uganda sites, where two in five women said in 2014 that they took the recommended three or more doses during their last pregnancy.   Treatment was sought for the majority of children in the Uganda sites (70-84%), but in Ethiopia the proportions varied between the sites (70-84% in Guba and 42-61% in Hembecho).   Malaria epidemiology seems to be changing as compared with earlier published data. It is essential to collect more data to understand how much the changes are attributable to control interventions and other factors. Continued and regular monitoring will help to better interpret changes, identify determinants, modify strategies and improve targeting of interventions to address increasing heterogeneity of transmission. This study showed that individuals using ITNs are at a significantly lower risk of contracting malaria, and most human-vector contact still occurs indoors, especially with both A. gambiae s.s. and A. arabiensis in Uganda. ITN use varies from site to site but access to nets is an important determinant of net use behaviour among the populations. There are high rates of resistance against pyrethroid insecticides. Malaria transmission has declined substantially in sites that have been under IRS. While the prevalence of malaria and infective biting has increased in one site in Uganda (Butemba) that is not under IRS, further studies are needed to fully understand the impact of existing interventions in this and similar areas. After the final survey round, morbidity studies showed the resurgence of malaria following withdrawal of IRS in Apac and other districts. This phenomenon should also be investigated and appropriate strategies developed to maintain the reduction in transmission levels.   Less