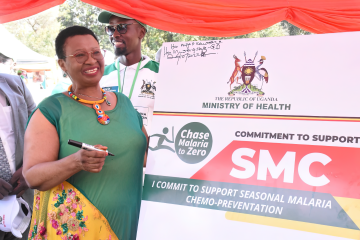 Today, Uganda celebrated the official launch of its seasonal malaria chemoprevention (SMC) programme at an event in Moroto, attended by Uganda’s State Minister for Health - General Duties, Anifa Kawooya. In 2023, the government anticipates reaching 270,000 children under the age of five across eight districts in Karamoja.

“The government of Uganda, through the Ministry of Health’s Malaria Reduction and Elimination Strategic Plan (2021-2025), is prioritising the Karamoja region, which had the highest malaria burden at the time of development in 2019/2020. SMC will be delivered here through a door-to-door approach, with community health workers administering the SMC medicines during the high transmission period. We aim to drive the country towards zero malaria status by deploying evidence-based malaria interventions that are targeted and deployed based on context,” Dr Jane Ruth Aceng Ocero, Minister of Health for Uganda.

Malaria is the leading cause of death and illness in Uganda, with children under five contributing disproportionately to the high incidence rates. In Karamoja, a subregion in the northeast of the country with an estimated population of 1.4 million, malaria incidence is the highest in the country – ranging between 250 and 450 per 1,000 people, as compared with the national incidence rate of 30 per 1,000 people. In 2020, children under five years accounted for close to 30 percent of all inpatient deaths.

Since 2021, Malaria Consortium – in collaboration with the country’s National Malaria Control Division (NMCD) – has been researching the effectiveness of SMC in this new geography, through a series of trials, to protect children aged 3-59 months when they are most at risk.

Anthony Nuwa, Malaria Consortium’s Senior Country Technical Coordinator in Uganda, noted: “The implementation study in 2021 evaluated the feasibility, acceptability and protective effect of SMC in two districts in Karamoja (Kotido and Moroto). 90 percent of children who received SMC as part of the non-randomised controlled trial did not experience any malaria episodes during the peak transmission season, whereas this was true of only 15 percent of children in a control group that did not receive SMC.”

Malaria Consortium identified lessons through the study in relation to acceptability of the programme. Involvement of all district leaders, both political and technical, leveraged critical support and enhanced acceptability from other stakeholders. Engaging local leaders was also found to be essential to the widespread acceptance of SMC amongst community members.

David Odong Salandini, Malaria Consortium Uganda Project Manager for SMC, added: “Understanding the local context and its dynamics in Karamoja was essential to the acceptability of the SMC programme. People there are mostly nomadic pastoralists who live in Manyattas – small, makeshift structures of reeds and rough mud. This enables them to move from place to place with their livestock but makes the use of conventional and existing malaria control interventions difficult, such as long-lasting insecticidal nets (LLINs) and indoor residual splaying (IRS). In Uganda’s journey towards malaria elimination, SMC offers an effective alternative intervention to these conventional tools."

The Ugandan government aims to reduce malaria infections by 50 percent and mortality by 75 percent by 2025 (estimates from the World Health Organization’s World Malaria Report 2021 put the number of cases at around 20.4 million and the number of deaths over 30,000) and move the country into pre-elimination, through combinations of interventions including surveillance, monitoring and evaluation, social and behaviour change and innovative chemoprevention approaches, tailored to different epidemiologic contexts.

As part of phase 2 of Malaria Consortium’s ongoing research, a randomised-controlled trial will be conducted to confirm the effectiveness of SMC. This will also assess the chemoprevention efficacy of the SMC medicines and monitoring molecular markers for resistance to them. This work continues across five districts in Karamoja. Results from this phase of the study are expected in 2023.

Photo Story: SMC beyond the Sahel: Protecting children from malaria in Uganda