23 May 2011
20 July 2011: The media, in its many forms, plays a highly significant role in bringing development issues from all over the world to broad public attention. As a result, it was with great pleasure that Malaria Consortium decided to take part in this year's One World Media Awards and to sponsor the Documentary Award.

The One World Media Awards, held on the 10th May, showcased some of the most important media coverage of the past year on issues of global development and world affairs. Films entered into the documentary award strand specifically, were of a very high standard, covering important and often controversial issues. 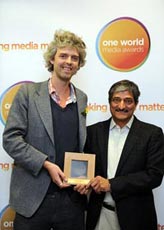 The Jury, which included representation from Malaria Consortium, thought the winning documentary, Welcome to Lagos, was outstanding in its tone; providing an original take on the typically portrayed view of Africa and urban living and extraordinary insight into one of the fastest growing cities in the world.

The whole ceremony was filmed and aired by BBC World; you can watch clips from the three shortlisted documentaries being introduced by Jon Snow, host for the ceremony, and see Sunil Mehra, Malaria Consortium Executive Director, presenting the documentary award to the Welcome to Lagos producer, Will Anderson here

For the occasion, Malaria Consortium also developed a short film highlighting the devastating effects of malaria but also showing how our work is providing long-lasting change and making a difference in some of the worst affected areas.