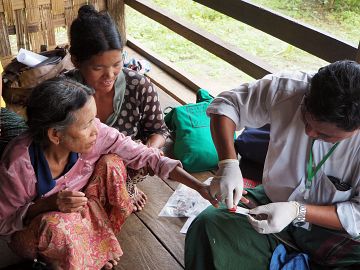 Malaria incidence in Myanmar has significantly reduced over recent years, however, completeness and timeliness of incidence data remain a challenge with an estimated malaria at-risk population of 32,120,000 residing in 15 malaria endemic states and regions.

As part of the malaria infection and seroprevalence survey conducted in Myanmar in 2015, blood samples were collected from 13,726 household members for PCR analysis. 11,653 dry blood spot samples were available for serological analysis to test for antibodies to the two major Plasmodium species – P. falciparum and P. vivax. To explore potential geographic clustering of prevalence and seroprevalence, GPS coordinates were recorded for every sampled household.

The researchers found a dominance of P. vivax prevalence which is in contrast to routine surveillance data, which detects incident symptomatic clinical cases only and places P. falciparum as the major malaria species (75 percent) in Myanmar. Using PCR, the researchers were able to detect a low-level national prevalence of just 0.74 percent for all-species Plasmodium infection, or 0.17 percent and 0.52 percent for species-specific P. falciparum and P. vivax infection, respectively.

The vast majority of PCR-positive P. vivax infections were asymptomatic, defined as not having current fever nor reported fever in the previous two weeks. P. falciparum had a higher proportion of symptomatic infection compared to P. vivax.

“This is a very relevant publication as it reveals key programmatic and epidemiological implications that are not apparent when analysing routine surveillance data. This survey made use of serology in combination with PCR to enrich findings by mapping areas of potential high transmission that would have been missed by looking at infection prevalence results alone.

"In addition, by comparing areas of high seropositivity – suggesting areas of past transmission – with areas of PCR positivity – current transmission – it is also possible to explore areas of potential high receptivity to complement surveillance efforts and guide programmes on optimal implementation of malaria control interventions,” said Arantxa Roca, Head of Surveillance, Monitoring and Evaluation at Malaria Consortium.

As expected, seropositivity increased with age for both P. falciparum and P. vivax. Seroprevalence of P. falciparum was also associated with wealth, staying in the forest and ownership of nets, as well as location and being PCR positive. P. vivax seroprevalence was also associated with age and domain, as well as being PCR positive, having a current fever, ownership of nets and knowledge of nets.

Achieving malaria elimination
There has been increasing interest in the use of highly sensitive infection tests and serological methods in monitoring malaria transmission intensity in low transmission settings where prevalence is low, since a large proportion of infections are asymptomatic and low density and consequently missed by conventional diagnostic methods.

Myanmar has the highest incidence of any country in the Greater Mekong Sub-region countries, with evidence of artemisinin resistance, challenges of highly mobile population groups, remote and hard-to-reach areas of high transmission and outdoor biting vectors presenting obstacles to reaching the country’s goal of malaria elimination by 2030. Programmatically the study findings are important because to achieve malaria elimination, these relapses of infection will need to be targeted to remove the P. vivax infection reservoir.

The Myanmar malaria infection and seroprevalence survey was a cross-sectional, two-stage stratified cluster-randomised household survey conducted from July–October 2015. The aim was to better understand malaria epidemiology and highlight gaps in the Annual Parasite Index (API) data which is used for malaria interventions and control of drug resistance.