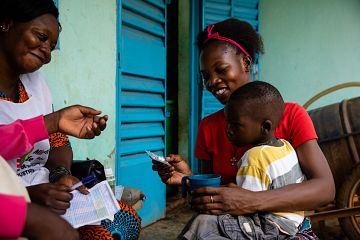 Malaria Consortium is delighted to announce that our seasonal malaria chemoprevention programme has been awarded ‘top charity’ status by GiveWell for the fourth year in a row.

GiveWell is a US-based non-profit organisation that conducts in-depth research to determine ‘how much good’ a charity programme accomplishes for every dollar spent, selecting its top charities each year. Malaria Consortium’s seasonal malaria chemoprevention (SMC) programme has been chosen again as highly effective for averting deaths at the cost of just $4 a child.

GiveWell said: “Malaria Consortium stands out as an excellent organisation and we're excited to advise that donors who want to choose a charity to support donate to Malaria Consortium's SMC programme.”

“We are delighted that we have been selected once again by GiveWell as one of their top charities for our SMC programme,” said Charles Nelson, Malaria Consortium’s Chief Executive. “Malaria Consortium brings extensive experience, technical expertise and tested models of delivery to SMC projects, and the encouraging support of GiveWell will help us extend the coverage of eligible children, reduce cases of malaria and save more lives.”

Malaria Consortium’s SMC programme focuses on preventing malaria in some of those who are most vulnerable to the disease - children under five years - during the rainy season in the Sahel region of Africa. Most malaria illness and deaths occur during this peak malaria transmission, which normally runs from July to October. SMC involves administering four monthly courses of antimalarial drugs during the period of highest risk.

“We work with national malaria control programmes to deliver SMC using existing health system mechanisms as much as possible,” said Christian Rassi, Malaria Consortium’s SMC Programme Director. “This ranges from developing high-level plans and policies at central level, right down to identifying the number of health workers and community distributors needed to deliver the treatments, mostly by going door-to-door, even in the most remote locations. GiveWell’s continued support enables our programme to maintain high standards of quality of service delivery, as well as strengthen our ability to generate robust evidence of its impact.”

It is estimated that more than 30 million children aged between 3-59 months are at risk during the Sahel’s rainy season. In 2019, Malaria Consortium reached close to six million of these across Burkina Faso, Chad and Nigeria.

The World Health Organization estimates that SMC can prevent around 75% of malaria cases in children under five. Not only does this increase children’s chances of survival, it also reduces the need for caregivers to look after sick children, enabling them to spend more time providing a livelihood for their families.

Malaria Consortium began implementing SMC in 2013 and led the rapid scale-up of the intervention through our Unitaid-funded ACCESS-SMC project in 2015. Although this project ended in 2018, we have continued supporting the delivery of SMC in the three countries, predominantly with support from philanthropists influenced by our GiveWell ‘top charity’ status.