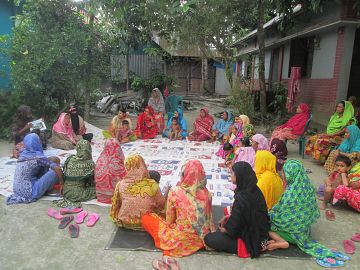 The film focuses on the use of the Community Dialogue Approach in order to engage rural communities around this issue. In Bangladesh, the Approach is being used to create a supportive environment for people to adopt recommended behaviours – particularly with regard to their use of antibiotics when they are sick.

In this case, Community Dialogue was used to encourage people to visit a qualified healthcare provider when they are sick, in order to get a professional diagnosis and a prescription when necessary, and then to complete the course of antibiotics as prescribed.

Before this intervention, many people would visit pharmacists when they were sick, where they often received antibiotics without a proper diagnosis, including for diseases for which antibiotics are not effective. When they bought antibiotics, they frequently did not complete the full course – instead keeping the drugs for future use or sharing them with others, resulting in incomplete cure of infections. These behaviours facilitate the growth of resistance.

The film advocates for engaging communities in a multi-sectoral, One Health response to antimicrobial resistance, and explains how the Community Dialogue Approach could now be expanded to help prevent the injudicious use of antimicrobials in agriculture and livestock, as well as in human health.

The film was shown for the first time at a three-day conference in Nepal hosted by the University of Leeds and HERD international. The conference, which ran from 26-28 June, aimed to investigate the potential of community engagement methods to tackle antimicrobial resistance. It was attended by policymakers, researchers and practitioners from around the world.

Antimicrobial resistance is a major global challenge affecting people, animals and the environment. It occurs when bacteria and other microbes become resistant to the drugs designed to kill them, meaning common infections become much more dangerous and difficult to treat. Global misuse and overuse of antimicrobial drugs mean resistance is increasing; it is already estimated to cause 700,000 global deaths per year, and the UN recently declared that it could kill 10 million people by 2050[i].

The Community Dialogue project in Bangladesh was led by the Nuffield Centre for International Health and Development, University of Leeds, in collaboration with ARK Foundation, Malaria Consortium and the University of Liverpool. The film was funded by the Global Challenges Research Fund, and it features contributions from Professor Enayet Hussain from the Ministry of Health and Family Welfare in Bangladesh, Dr Rumana Huque from ARK Foundation, and Community Dialogue facilitators and participants.