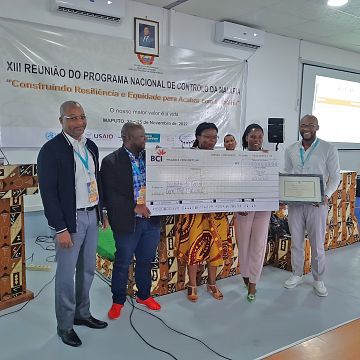 Malaria Consortium presented results from an evaluation of data quality for in-hospital malaria deaths to Mozambique’s Minister of Health at the at the 13th meeting of the National Malaria Control Programme (NMCP) in Maputo last week. The three-day event brought together global and national partners working to reduce malaria deaths in the country, and the NCMP shared developments of its Upcoming Strategic Plan (PEM 2023-2030).

In 2020, the number of malaria deaths reported in hospitals across the country showed underreporting by 38 percent. Malaria Consortium Mozambique’s Country Technical Coordinator, Sónia Maria Enosse, commented: “The purpose of the evaluation was to identify and recommend actions to improve the quality of death data reported in central, general and provincial hospitals in the country. By investigating the underreporting of data reported through the national health management information systems (known as SISMA), and encouraging a culture of quality data production, Mozambique can strengthen its malaria surveillance, improve data quality and increase the use of data for strategic and operational decision-making.”

The PEM is expected to outline four strategic focus areas for malaria control: case management; chemoprevention; surveillance, monitoring and evaluation; and operational research. It is hoped that the PEM will strengthen the country’s surveillance system, so that 100 percent of health facilities report complete, timely and quality data that will facilitate more responsive and effective decision-making across all levels of the health system.

Malaria is highly endemic in Mozambique. The country, which is home to nearly 30 million people, accounts for around four percent of malaria cases globally. The entire population is at risk, with the highest prevalence of the disease in the north and along the coast.

Following Malaria Consortium’s successful implementation of seasonal malaria chemoprevention (SMC) in Mozambique for the first time – a highly effective intervention to prevent malaria through administering monthly doses of antimalarial drugs to children aged 3-59 months during the peak malaria transmission season – the NMCP is considering plans to roll-out SMC nationally for malaria prevention with the support of Malaria Consortium.

NMCP Director, Dr Baltazar Candrinho, praised the role of Malaria Consortium in carrying out a Zero Malaria Starts With Me competition, then announced the winning districts with the best quality of malaria data: first place, Rapale district in Nampula; second place, Guru district in Manica; and third place, Mecanhelas in Niassa.