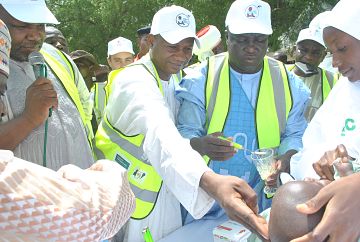 Over the next four months, the campaign will distribute preventive antimalarial medication to 6 million children under five years of age in Burkina Faso, Chad and Nigeria, protecting them from malaria throughout the rainy season.

Seasonal malaria chemoprevention (SMC) is a WHO-recommended intervention that is designed to provide antimalarial protection to those most at risk during the rainy season: children under five. It involves giving each child a combination of two safe and effective drugs, amodiaquine and sulfadoxine-pyrimethamine, once a month for four months, from July to October. This is the time of year when most malaria illness and deaths occur across the Sahel sub-region.

Malaria Consortium has been delivering SMC campaigns in the Sahel since 2013. The organisation works closely with National Malaria Control Programmes, as well as state, regional and district health authorities in each country to organise and coordinate the campaigns. This year’s campaign began in Burkina Faso on 22 July, and in Chad and Nigeria on 25 July.

The programme is implemented with the support of UK aid, the Global Fund and USAID’s President’s Malaria Initiative, but it is predominantly funded by philanthropic and individual donations. The intervention has been top-rated by independent charity assessor GiveWell, which analyses the amount of good achieved by an organisation per dollar spent.

Malaria Consortium’s SMC programme has been rigorously assessed by GiveWell, and found to be highly effective and good value for money. GiveWell estimates that it costs less than $7 to deliver four months of SMC to one child. Rates of malaria in children under five fall by as much as 75% when SMC is used alongside other interventions such as indoor residual spraying and sleeping under insecticide-treated nets.

“We are delighted that our SMC campaign has begun in these three countries,” said the programme director, Christian Rassi. “We have spent the past few weeks training drug distributors and their supervisors, and ensuring that the drugs required have reached their destinations. Now our work can begin in earnest, as we seek to protect millions of vulnerable children from malaria this rainy season.”