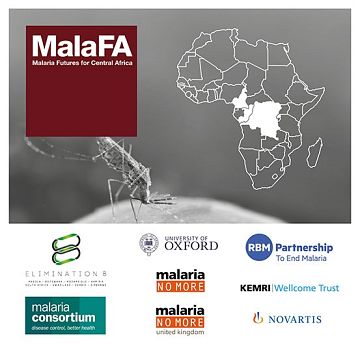 Abuja, 22 October 2019 – Central Africa is fighting to maintain momentum in its battle with malaria in the face of other health challenges, climate change and other threats, according to a new report issued at an RBM Partnership to End Malaria conference in Abuja today.

The report was the latest extension of the Malaria Futures for Africa (MalaFA) study, commissioned by Novartis, which has already conducted similar research across 15 countries, including Nigeria, to survey African malaria stakeholders on progress and challenges towards global malaria targets. The new report involved interviews with 23 politicians, senior civil servants, malaria programme directors, researchers and NGOs in Cameroon, Democratic Republic of the Congo (DRC), Republic of Congo, and Rwanda. All four are countries that have a significant malaria burden and differing policies in place to fight the disease.

In Rwanda, respondents were mainly positive about the country’s fight against the disease, citing high levels of political support and funding. In Cameroon, DRC and the Republic of the Congo respondents shared the view that halving deaths by 2030 was more achievable than elimination.

Respondents in Cameroon, DRC and the Republic of the Congo were concerned about access to health services, inadequately trained personnel, substandard or falsified antimalarials and self-treatment without diagnosis – which could potentially accelerate development of resistance to treatment. These concerns are shared in many other countries previously surveyed.

Unlike countries previously surveyed in West, East and Southern Africa in early 2018, Central African respondents saw climate change as more of a threat. One respondent in Rwanda worried that malaria was creeping up into highland regions which had previously been free of the disease, and others discussed how changing rainfall patterns could have an impact on mosquito breeding seasons.

More domestic and international funding was also cited as critical, with respondents from Cameroon, DRC, and Republic of Congo saying more support is needed. Earlier this month, at the recent Replenishment conference for the Global Fund to Fight AIDS, Tuberculosis and Malaria, world leaders increased funding for programmes addressing these diseases with pledges totaling $14 billion for the period 2020-2023, meeting the Global Fund’s funding target. Rwanda pledged $2.5 million, DRC, Congo and Cameroon also made domestic resource pledges of $6 million, $5.5 million and $5 million, respectively.

Dr Richard Nchabi Kamwi, Ambassador for the Elimination 8 countries and a co-chair of the study, said: “Maintaining momentum against malaria requires strong political leadership, resilient health systems and securing additional resources. The pledges made at the recent Global Fund replenishment are heartening signs that critical resources are forthcoming. It’s also important that Cameroon and DRC have been identified by the World Health Organization and RBM Partnership as “high burden to high impact” (HBHI) countries, ensuring these countries will benefit from increased attention and investment from the international community.”

The other study co-chair is Professor Bob Snow, KEMRI-Wellcome-University of Oxford Collaborative Programme in Kenya.

HBHI is an initiative supported by the RBM Partnership to End Malaria and the World Health Organization to build international support and country-led responses to reignite the pace of progress in the global malaria fight. Respondents associated with malaria control programmes in the two HBHI countries in the study were aware of the strategy and believed that with sufficient resources it would be highly beneficial.

Interviewees in the DRC saw the country as particularly hampered, having to fight a major Ebola outbreak while also bearing the second highest burden of malaria in the world. Inconsistent and variable funding from some donors and domestic sources was highlighted, as well as the need to translate national political will into increased domestic financing.

Several of those interviewed also mentioned the need for effective disease surveillance and better use of surveillance data. Rwanda, for instance, implemented a three-year bednet study in 2017 to examine the physical durability and insecticide residual efficacy of insecticide-treated nets. The results from this study were used by the country to revise its bednet distribution strategy and make it more cost-effective. This showcases the importance of collecting data to help prioritise resource allocation, targeting, and monitoring of resistance to treatment and insecticides. Solid data will be critical to the success of HBHI and in the wider fight against malaria.

“Progress against malaria has stalled, and we need a renewed sense of urgency – and funding – to accelerate the fight against this devastating disease,” said Kolawole Maxwell, West and Central Africa Programmes Director for Malaria Consortium. “In central Africa and beyond, we need to boost domestic funding, build stronger malaria surveillance systems, and enhance operational research and the development of new tools.”

Novartis commissioned the MalaFA studies as part of a two-year effort to understand the views of national and regional experts across Africa and Asia on progress and challenges toward malaria elimination.

Parfait Touré, Head, Access Programs West and Central Africa for Novartis Social Business, highlighted: “In Africa, there are still over 200 million cases of malaria every year, and over 400,000 deaths, mostly young children. This research shows there are many challenges still to be overcome. But ensuring the voices of those at the front line are heard is essential.”

To download copies of the MalaFA reports, go to: bit.ly/MalaFA-Central-Africa

Read our news piece on the Malaria Futures for Asia report