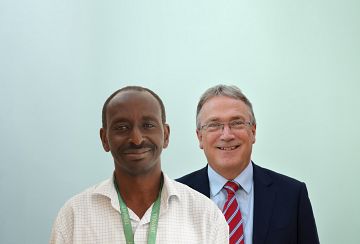 “On behalf of the Board of Trustees, I am delighted to welcome James as Malaria Consortium’s new Chief Executive. His appointment represents a harmonic transition within Malaria Consortium, and heralds an exciting new era for the organisation, as we build on our record of accelerating the reduction in the burden of targeted diseases and continue our work with health systems across Africa and Asia, supporting them to become more responsive and resilient. In addition to his outstanding professional achievements and leadership in the field of global public health, his longstanding history with Malaria Consortium means he is uniquely placed to lead the organisation in delivering on its mission”, Marcel Tanner, Chair of Malaria Consortium’s Board of Trustees.

On taking up his position as Chief Executive, James said:

“I am excited to be starting in my new role as Chief Executive of Malaria Consortium. It is a privilege to serve the organisation and its stakeholders to deliver impact through its mission. Under Charles’ leadership there has been tremendous growth and transformation. It is a responsibility to build upon the huge progress made over the last decade and ensure that Malaria Consortium continues to be dynamically relevant in a future filled with change and uncertainties. Multitudinous appreciation with everyone and, as I start this journey, I ask you to join me in creating sustainable impact.”

He takes over the position from Charles Nelson, who joined Malaria Consortium as Chief Executive in 2013. Reflecting on his departure, Charles said:

“It has been a great privilege to lead the organisation on the journey of the last ten years. James has been with us throughout that journey and there is no one better placed to take over the role for the next season. I wish him and Malaria Consortium every success in the continuing mission to serve those that need it the most.”

Commenting on Charles' departure, Chair of Malaria Consortium’s Board of Trustees Marcel Tanner added, “I would also like to take this opportunity on behalf of the Board and the entire organisation, to extend our most sincere thanks to Charles for leading Malaria Consortium with such incredible energy and vision through a period of exceptional growth. His unwavering commitment to addressing health inequity over the last decade, and driving forward the organisation’s evidence-led approach, has undoubtedly helped to embed Malaria Consortium as an effective implementor and much trusted partner within the global health space and we wish him all the best in his future endeavours.”