Whilst the COVID-19 vaccine was developed in an unprecedented timeframe, it has taken combined efforts, spanning 30 years, for a malaria vaccine to reach the potential for wide-scale distribution. In October 2021, the World Health Organization (WHO) announced their recommendation that children in moderate-to-high malaria transmission settings in sub-Saharan Africa should be given the RTS,S/AS01 vaccine to curb Plasmodium falciparum malaria infections.

This momentous news was received with global optimism, rightly so given its huge potential for contributing to lessening the burden of malaria. However, it should also be recognised that even after the vast scientific and logistical exercise of developing and distributing a malaria vaccine is accomplished, vaccine hesitancy presents an additional hurdle to ensuring it reaches as many children as possible and is able to realise its full potential.

What is vaccine hesitancy?

Vaccine hesitancy refers to a delay in acceptance or a refusal of vaccines, despite their availability, normally owing to low levels of trust and belief in the efficacy and/or safety of a vaccine, the health system, government and vaccine manufacturers. This lack of trust in vaccines and the stakeholders involved can occur as a result of ineffective public health messaging or contradicting information from unreliable sources, including through social media and word of mouth. It has also been attributed by some to mistrust of government and pharmaceutical companies, irresponsible journalism, and inconsistencies in the knowledge of vaccines within health services. In low- and middle-income (LMIC) countries, vaccine hesitancy can also arise from conspiracy theories as to the motives of people promoting the vaccine, especially if associated with non-national or organisations, including NGOs who are not known to communities. Mistrust is also exacerbated by instances, albeit rare, of children who become well following vaccination, as well as mass information campaigns about vaccines and vaccination not directed to the appropriate audience – recipients of the intervention or their caregivers.

Crucially, the idea of vaccine hesitancy differs from the more well-known ‘anti-vaxxer’ movement, which advocates for the complete rejection of vaccines, regardless of scientific basis.

How prevalent is vaccine hesitancy?

As a result of the recent COVID-19 pandemic and the subsequent global mass-vaccination campaign, there has been increased research into vaccine hesitancy. A recent Africa Centres for Disease Control and Prevention (Africa CDC) study undertaken in 15 countries found that reported willingness to accept a COVID-19 vaccine was highly variable across the African continent – while 79 percent of respondents would accept a COVID-19 vaccine, vaccine hesitancy by country ranged from 4 percent to 38 percent. The study reported that people with high levels of hesitancy were more likely to use social media and be exposed to disinformation. In another study from Afrobarometer, vaccine hesitancy was found to correlate with trust in a government’s ability to provide a safe vaccine – cited by 40 percent of respondents from Ghana who were unwilling to accept a COVID-19 vaccine.

Other recent research shows that vaccine confidence is increasing in many countries. A 2020 study, conducted by Imperial College London, found that confidence in the importance of vaccines for health, rather than their safety or effectiveness, had the strongest association with vaccine uptake. As science continues to advance, those involved in vaccine development are able to take advantage of and incorporate new technologies, such as m-RNA, into their work. Unsurprisingly, introduction of these new technologies into vaccines and misconceptions about what they are and how they work have caused additional hesitancy.

The conceptual model of vaccine hesitancy shows it existing on a continuum between a full refusal of vaccines and full acceptance, and that hesitancy is fuelled by a range of diverse factors. Importantly, this illustrates that a person could sit with varied feelings about vaccination – a parent may choose to vaccinate their child but not themselves or accept all recommended vaccinations but still be considered vaccine hesitant. This underlines the ‘multi-dimensional and context-specific’ nature of vaccine hesitancy which makes responding more complex. 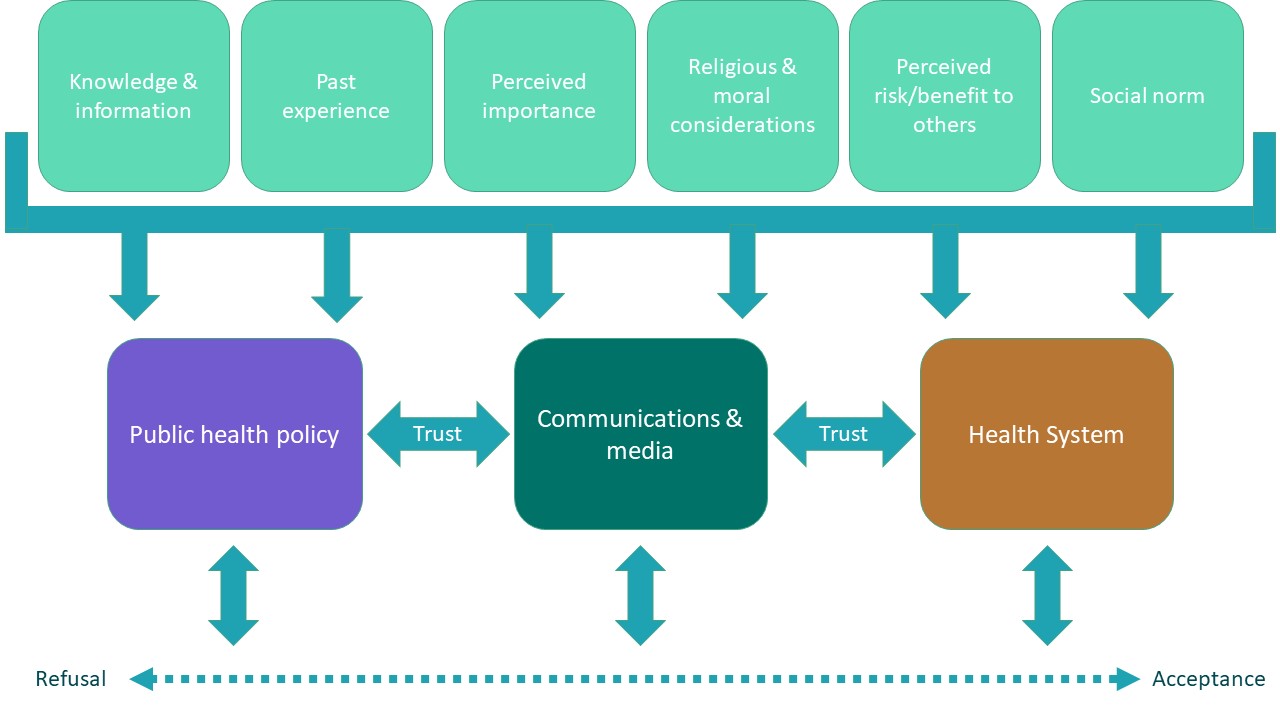 In the case of malaria, populations in sub-Saharan Africa are generally aware of and concerned about the potential consequences of the disease. The high uptake of seasonal malaria chemoprevention (SMC), where it is distributed, compared for example with the suspicion and low uptake of mass polio campaigns in these same areas is an example of the influence that awareness and experience of the disease being prevented has on hesitancy.

A significant challenge with the existing malaria interventions, such as seasonal malaria chemoprevention, intermittent preventative treatment during infancy (IPTi) and now the RTS,S malaria vaccine, is that it is still possible to contract malaria having received one or more of these interventions and additional preventive measures, such as the use of long lasting insecticide nets (LLINs) are still required. Results of Phase 3 testing of the RTS,S vaccine showed that among children aged between five and 17 months who received four doses, vaccine efficacy against malaria was 36 percent over four years of follow-up. The introduction of only partially effective interventions could, in the long run, reduce the confidence in the efficacy of the RTS,S vaccine and affect the uptake of more effective malaria vaccines in the future.

How can vaccine hesitancy be countered?

As a result of wide-ranging influences, there are multiple interventions and techniques that could be factored into any given national malaria vaccination plan. As with any behavioural intervention, understanding and addressing the structural and attitudinal barriers and the motivations influencing vaccine uptake are key for effective communication (these vary not just between but also within demographic groupings). Before assessing additional responses to vaccine hesitancy, factors influencing uptake must be understood and can be both barriers to overcome and enablers to be leveraged.

Examples of structural barriers could relate to the time lost while travelling for vaccination and lack of transportation. Examples of attitudinal barriers include perception of risk, severity, and death from the infection, anticipated regret, and a lack of confidence in vaccines or the system that is overseeing their distribution. These issues are in turn influenced by perceived social norms, knowledge, motivation, culture, religion, and political ideology. Once barriers to uptake are identified; three elements are central to building vaccine confidence and persuading the vaccine hesitant to receive a vaccine communication, the role of the health sector and public health policy.

The role of communication

Vaccine distributions rely on effective communication strategies to address vaccine hesitancy and approaches such as targeted social and behaviour change communications and social mobilisation play a key role in this. Research suggests that countries with strong community health systems and community leadership are likely to have lower levels of vaccine hesitancy. A recent study published in Nature Medicine found that over half of respondents from LMICs identified community health workers as the most trustworthy source to help them decide whether to accept a vaccine. However, in communities where health literacy is already low or health services are not widespread, a more diverse strategy for behavioural change may be required.

An integrated approach to communications by policy makers, for-profit and non-profit organisations, communities means that messages are consistent, and that any given community has a range of avenues to learn and engage with the vaccination programme and outlets to express concern. This approach also aids rumour management in which rumours about vaccination that may be communicated via social media, for example, can be identified and addressed.

The role of the health sector and public policy

The health sector is at the forefront of any vaccination campaign and building the confidence of vaccine-hesitant patients is a key task for health practitioners from community health workers and nurses to midwives, doctors and pharmacists. However, some studies show that vaccine hesitancy is prevalent within health sectors in various countries. A recent study of health workers in Turkey ahead of the start of the country’s COVID-19 vaccination programme found that only 69 percent of the 1,138 healthcare workers asked, indicated that they would be willing to take a COVID-19 vaccine. The reasons given included safety concerns and lack of trust in pharmaceutical companies, underlining the need for clear communications on vaccine safety to healthcare professionals and community level health workers as well as the wider public to fulfil their role as trusted sources of information on vaccination.

Healthcare professionals that are found to be personally supportive of vaccinations must be provided with adequate information and training to be able to authoritatively respond to patients concerns. Healthcare regulators and government should plan to ensure healthcare workers are comfortable taking safe and efficacious vaccines and passing the same positive recommendations to patients.

Countries across Africa, including Uganda, are announcing their plans to start malaria vaccine rollouts from as early as next year. To ensure the best possible success of this ground-breaking vaccine in lowering the number of cases and deaths from malaria, strong, clear communications to all stakeholders and communities as to the safety and benefits of RTS,S are critical.

Social and behaviour change activities at a community level will have a significant role to play in increasing awareness and understanding and integrating these activities into existing health systems and utilising existing human resources, such as community health workers, to undertake these activities will play a key role in achieving an effective malaria vaccination programme.

Read our latest position statement on vaccines to find out more.