Dengue, for which there is no cure or vaccine, is one of the leading causes of hospitalisation and death among children in Asian and Latin American countries. Its incidence has grown dramatically around the world in the past 40 years.

According to the World Health Organization (WHO), the actual numbers of dengue cases are under-reported and many cases are misclassified, but despite this, evidence indicates a sharp increase in the number of cases in recent years. A number of factors have contributed to the rapid growth of dengue, including urbanisation, globalisation and climate change as well as a lack of effective mosquito control.

Cambodia is one of the countries in Asia that is considered an endemic area, where dengue cases have been identified every year since its first outbreak in 1963. A cumulative total of 3,543 cases were reported to the National Dengue Control Programme (NDCP) in 2014. For this reason, Malaria Consortium has begun implementing dengue projects in the country. Recently, Mr Ian Boulton, a Malaria Consortium Trustee, together with technical officers led by Dr. Jeffrey Hii, Malaria Consortium’s regional Senior Vector Control Specialist, visited the Tong Rong health centre and eight households in Kampong Cham province, Cambodia, to look into local methods of vector control.

Dr. Hii demonstrated an example of entomological monitoring using simple tools to collect live mosquito larvae and pupae. The team observed how sweep nets were used to collect live specimens in the cement water jars. These live specimens were transferred to white plastic pans to facilitate differentiation between mosquitoes and non-mosquito organisms, before transferring to plastic bags for species identification in the laboratory. This method of sampling attracted the attention of young children, women and men who were informed about the purpose of the visit and were told about the link between Aedes mosquitoes in water containers and dengue fever. What was impressive was that some households have reared guppies in the water containers; on average, a guppy can eat over a hundred larvae each day.

Although the use of guppy fish has been recognised as a low cost, sustainable and effective approach to reduce dengue vector populations and the risk of dengue transmission, it has some limitations. Aedes mosquito breeding is not limited to large water jars or cement tanks, but they also breed in other containers, where water can collect, such as flower vases, plant pot bases, discarded cans, coconut shells and tyres.  As a result, mosquito breeding and some dengue risk still persists. In order to reduce Aedes breeding and populations further, Malaria Consortium is currently implementing a project that will evaluate an alternative low-cost, sustainable and effective approach with other larvicides that can be used in combination with guppy fish.

Communication for Behavioural Impact (COMBI) has been included as part of dengue control efforts to create a supportive environment for behaviour change and make community participation a vital part of the project.

To drive and sustain these integrated vector control management strategies, Malaria Consortium Cambodia works together with National Centre for Parasitology, Entomology and Malaria Control to provide dengue surveillance strengthening support and develop the Provincial Health Departments’ capacity to  detect any dengue outbreak and implement the responses. 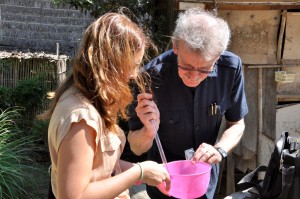 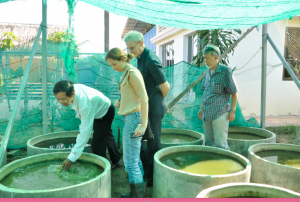 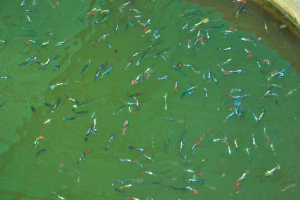 The team visited the guppy farm to investigate different breeds of guppy fish and their capacity to eat mosquito larvae.