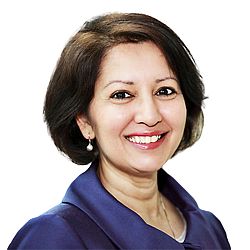 Baroness Shaista Ahmad Sheehan is a British-Pakistani peer, appointed to the House of Lords in October 2015.

Prior to that she was the Liberal Democrat Spokesperson for Immigration, in which role she took a keen interest in the welfare of refugees and sought to understand the push factors that have generated 65.6 million refugees worldwide.

Baroness Sheehan has been a member of the Lords EU Select Committee’s sub-Committee on Energy and Environment since December 2015, which also looks into matters affecting climate change.

She was elected as a local councillor for Kew ward on Richmond Borough Council in May 2016, where she served as Assistant Cabinet Member for Energy and Climate Change and on a number of committees, including Planning, Health and Education.

Baroness Sheehan’s academic background is in chemistry (BSc, UCL) and environmental technology (MSc, Imperial College). Outside of politics, she is a mother of three and lives in south west London.