In 2020, Malaria Consortium began a phased implementation study to assess the feasibility, acceptability and protective effect of SMC in Nampula province, in the north of Mozambique. Working in partnership with Mozambique’s National Malaria Control Programme (NMCP) and Centro de Investigação em Saúde de Manhiça, an estimated 72,000 children aged 3-59 months received SMC in two districts, Malema and Mecubúri in the first phase of the project.

What is seasonal malaria chemoprevention?

Seasonal malaria chemoprevention (SMC) is a highly effective intervention to prevent malaria in those most vulnerable to the disease’s effects. It involves administering monthly doses of antimalarial drugs to children aged 3-59 months during peak malaria transmission season.

Malaria Consortium is a leading implementer of SMC. Our SMC programme in Burkina Faso, Chad, Mozambique, Nigeria, Togo and Uganda is top rated by GiveWell for its cost-effectiveness.

This story was captured in Mualua Sede neighbourhood, Mecubúri district.

Marlena is a widow and mother of two children, Dulce, 4 years old, and Dário, 13 months old. Her community in Mualua Sede is about 25 km from Mecubúri, a town that is difficult to communicate with because it lacks telephone network and is surrounded by one of the largest forest reserves in Mozambique.

Marlena, like other members of her community, was sceptical of the SMC campaign. This was the first time she had experienced health interventions being distributed from house to house, having previously only received medicine directly at the hospital. She feared that it might somehow be a plan to spread the coronavirus, in particular in younger children.

“When the leaders arrived here in the area, they began to inform us that people were going to visit our homes to give medicine to the children. I wasn’t clear as to the purpose and thought it was a way for this disease [COVID-19] that is passing through the cities to get here and kill our children. On the first day when they came to visit, I left the house so they couldn’t find me. Later in the afternoon, our community leader for this area came and told me not to be absent the next day so the children could take the medication and she explained to me that the medication was to prevent malaria in children.

Even with this explanation I wasn’t convinced. People have got very sick here in Mualua and we were never given medication in our homes before, that’s why the next day I chose to give the medicine only to my eldest, Dulce. I didn’t give it to Dário because I was afraid of losing both children if something went wrong and Dulce being older, is stronger. Only after the second month of drug distribution did I feel comfortable to also give the SPAQ to Dário because Dulce was well all month, more well than before she was taking the medication.

Later, the health worker came and talked to me. She explained to me that medicines should be given to all children from three months to 59 months to prevent malaria, because at that age children often suffer from malaria and it can be more dangerous. She said, that’s why the Government are undertaking this activity – it already happens with women who are pregnant, they are given medication to prevent diseases such as malaria and anaemia – so, this medicine is to prevent malaria in these children and we should not fail to give the medicine to them.

I am really grateful now, we had positive results and this medicine is good. Please continue to give the medication because when our children took it they didn’t get sick anymore. Before they were always sick with malaria. This season we had a good time without malaria.” 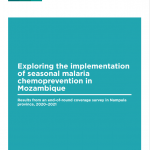