In February and March 2017, USAID’s Malaria Action Program for Districts distributed one million long-lasting insecticidal nets to 1,978,114 people in three districts in Uganda. A focus on promoting positive behavior 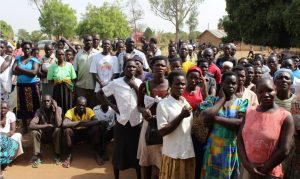 change on net use led to the successful delivery of the campaign.

In the three districts of Arua, Koboko and Nebbi in West Nile region, malaria, like in most parts of Uganda, is a serious public health problem. In these three districts, which have a combined population of over 1.5 million, over 700,000 confirmed or suspected malaria cases were reported to public health facilities in 2016.
USAID’s Malaria Action Program for Districts conducted a long-lasting insecticidal net (LLIN) distribution campaign in February and March 2017 as part of its objectives to increase the impact and reach of malaria prevention services. The project took a four-step approach in conducting the LLIN distribution campaign: 1) community sensitization 2) a community-led registration of households, 3) data-entry and verification, and 4) community-led distribution. During community sensitization, emphasis was placed on social behavior change communication (SBCC) to reach all targeted communities with relevant and effective messages on use of LLINs.

Promoting a Culture of Net Use

Prior to household registration, the project team convened a regional advocacy meeting in Arua district wi 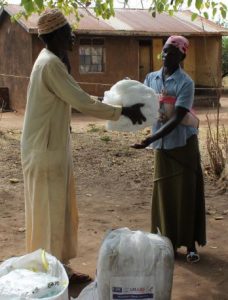 th local leaders from the three districts. These included district health officers, resident district commissioners, district health team, chief administrative officers and local council V chairpersons. Local leaders’ understanding of malaria prevention and their engagement in promoting positive behavior towards malaria prevention was key to the campaign’s success.
During this meeting, the project team shared malaria prevention strategies and messages to the local leaders who would then share these with their own communities.
The leaders committed to promoting a culture of net use, highlighting that a significant change in mindset and behavior towards prevention can lead to a ‘malaria-free world’. They shared a vision of a malaria-free district – where communities would have higher levels of productivity, due to less money lost on treating malaria and more time spent on income-generating activities. Leaders also raised the need for adequate community-led mobilization for household registration and subsequent LLINs collection, as well as working with the local wanaichi to create a net use culture.

The high turnout of community members can be attributed to effective community-led mobilization and the malaria messages that promoted positive prevention behaviors such as net use. In Nebbi district, for example, leaders indicated that sensitizing the community before the distribution was key to its success: 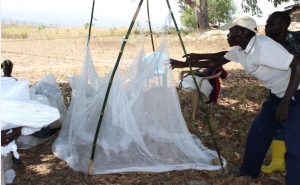 “… you will realise on the day of distribution that there is going to be high turnout of community members […] this has been shown in registration after the community’s sensitisation by political leaders and other stakeholders. When you look at the registration, you feel very happy that these people have been sensitised. The registration was 100 percent. Everybody registered because they understood why the nets are being distributed to them. So this has been a very big achievement.”
– Olweku Fred Jibril, Secretary for Social Services, Nebbi district

The campaign in the three districts reached 98 percent of households registered during the pre-campaign registration. At the wave one review meeting, district supervisors in the three West Nile districts reported that 91 percent of the population was sleeping under a net.

The net distribution campaign was welcomed by the community members and health workers alike:

“…On behalf of my people, we are very happy for this service, in fact, we have been having problems of malaria [for a long time], and case numbers had become so high that we could not manage with the current drugs in the hospitals. So I think with this, it is going to improve our health.”
– Achong Emmanuel, area LCI Oufa Village, Aiivu sub county

“The reason I have come for the net is because we have so many mosquitoes and there is a high rate of malaria, as we are along the river. The mosquitoes are very many. Without nets, there is no sleep here…”
– Net recipient, Rhino Camp

Lessons and Next Steps 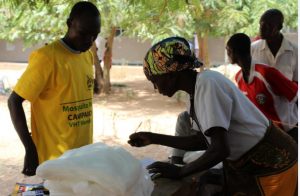 of immediate net uptake and sustained use of nets. An SBCC approach before the net distribution campaign allowed community leaders and members to be engaged in education around malaria prevention.
Building on these successes, USAID’s Malaria Action Program for Districts will continue to run an SBCC campaign to create a culture of net use through a community-led approach for promoting the correct and consistent use of nets which is supported by local council leaders.