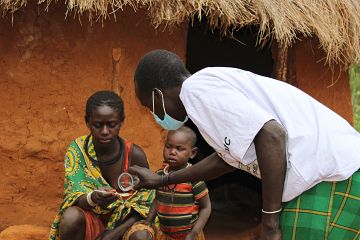 Today, the World Health Organization (WHO) published its World Malaria Report for 2021, assessing global and regional malaria trends over the last year and providing an opportunity to reflect on progress towards global targets.

Thanks to the incredible amount of work and effort put in by governments and organisations to mitigate the worst-case scenario of the pandemic, which could have seen a doubling of malaria deaths between 2019-2020, the increase was kept to 12 percent. This figure is still far too high, but the timing of the pandemic was such that it exacerbated the global malaria burden that had already been plateauing in recent years.

“Maintaining essential malaria services throughout the pandemic, including both interventions at scale such as mass LLIN distribution and seasonal malaria chemoprevention (SMC), as well as other essential services in remote regions by community health workers, many of whom are now using digital solutions, has helped to significantly mitigate the impact of COVID-19 and avert an even greater malaria crisis”, said Charles Nelson, Chief Executive, Malaria Consortium.

Yet for many, the headline news of the report is in the different methodology used this year to estimate mortality in children under five. This new methodology, whilst more precise, paints an even more concerning picture showing that malaria accounts for a greater proportion of under five deaths per year than previously thought – 7.8 rather than 4.8 percent.

“It is a sobering report and another wakeup call, but the new methodology does mean improved estimates. We have been underestimating the disease burden globally, most significantly in the WHO Africa region and in children aged under five years. In addition, the magnitude of impact that interventions have had over the last 20 years is also likely greater than previously estimated. Correcting previous estimations is a bold step given the investment that has been made into reducing the malaria burden and I applaud the courage needed to do so. These improved estimates should not however fuel despondency, it needs to galvanise urgent and collective actions for the goal of malaria elimination.” James Tibenderana, Global Technical Director, Malaria Consortium.

These actions need to address the coverage gaps, which are significant and growing in multiple regions, and optimize the effectiveness of interventions within health systems. While some countries like China and El Salvador have progressed to elimination status, overall, the global malaria situation is worrying. 2030 targets are well off track – malaria morbidity and mortality by 40 and 42 percent respectively. The funding gap also continues to widen, with an estimated $10.3 billion needed in 2030 if current trends continue.

“Action must be taken now to get back on track. The report provides us a pivot point from which to understand the critical role of country ownership and leadership for collective financing, smarter use of the existing interventions, effective surveillance and response, community engagement and social behaviour change alongside the research and development, and phased implementation of new interventions. The staggering figures cause us as a global community to renew our commitment to urgently end malaria within one generation.”

Malaria Consortium advocates strongly for national institutional capacity to be strengthened and greater resources provided to enable this. While multilateral and international funding is still vital to driving down the global malaria burden, greater domestic financing is an important step to sustainable, resilient health systems and ultimately reaching elimination. Working alongside governments and local partners, we should be drawing on the collective effort and expertise of the global malaria community.

Malaria Consortium’s strategy over the next five years prioritises data-informed decision-making, part of which is also tied to the expansion of digital approaches in community engagement. By embedding this into programmes, interventions can be prioritised and targeted more efficiently and effectively, adapting and responding accordingly. This is key to reducing the damaging effects of malaria, particularly in those countries identified as High Burden, High Impact (HBHI).