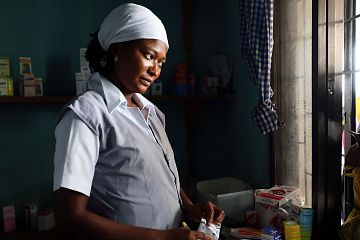 Yesterday, governments around the world pledged a record US$14.25 billion at the Seventh Replenishment conference for the Global Fund to Fight AIDS, Tuberculosis and Malaria in New York, hosted by US President Joe Biden. The conference, held during the UN General Assembly, convened over 45 countries including governments, multilateral partners, private sector and civil society organisations.

Despite falling short of the fund’s target of US$18 billion – an increase of 30 percent since the last replenishment, to regain progress lost during the COVID-19 pandemic – many African countries, hit hard by COVID-19, managed to increase their pledges.

Since the Global Fund's inception in 2002, significant progress has been made in fighting malaria: it is estimated that a 70 percent increase in malaria cases has been avoided because of Global Fund-financed interventions. However, almost two decades later, the global burden of malaria cases still stands at 241 million.

The UK, a founding member of the Global Fund, reaffirmed its commitment through its Minister for Development, Vicky Ford, but delayed an announcement on a financial pledge. The UK, along with Italy, are the only two countries still to pledge.

Global health is one of seven aid priority areas named by the UK in its new Strategy for International Development. A report published this week by ICAI, the UK’s internal aid spending watchdog, found that the Global Fund met the performance conditions set by the UK in all four key areas: leadership and collaboration; organisational effectiveness (including equity and sexual exploitation, abuse and harassment); impact; and sustainability. The Global Fund estimates that each £1 invested will yield a return of £31.

Malaria Consortium Technical Director, James Tibenderana, commented: “The UK has an opportunity now to step up, as other countries have done, and help to close the US$3.75 billion funding gap of the Global Fund’s target. Many African countries, also impacted by COVID-19 and other economic pressures, have increased their pledges by 30 percent, showing the necessary leadership and political will and sending the message around the world that ending malaria is possible”.

According to its domestic laws, the United States, which pledged US$6 billion this year, can only contribute one third of the total funding for the Global Fund. It is therefore necessary for the UK to pledge at least £1.8 billion to avoid any shortfall in US funding and the knock-on effects this could have on saving lives through Global Fund-funded interventions and development more broadly.

Despite the economic pressures caused by COVID-19, Brexit, food and energy crises and the overseas development aid spending limit of 0.5 percent of Gross National Income, a UK pledge of £1.8 billion would constitute only 0.06 percent of GDP.