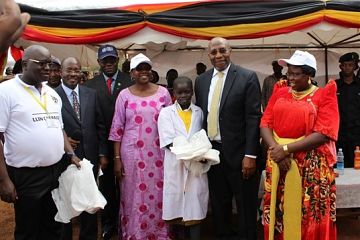 Apac district, Uganda - A campaign to distribute 24 million long lasting insecticide-treated nets (LLINs) across Uganda was officially launched in a ceremony held today in the Apac district, in the Northern Region of the country. The event was presided over by the Prime Minister, Dr. Ruhakana Rugunda who represented His Excellency the President of the Republic of Uganda, Yoweri Museveni. The launch marked the commencement of Uganda’s second universal coverage campaign for LLINs.

Malaria is the leading cause of death in Uganda, accounting for over 27% of deaths, according to the Ministry of Health. The World Health Organization estimates that over 50,000 deaths among children alone could be averted as a result of universal LLIN coverage campaigns.

The campaign, led by the Ministry of Health and Malaria Consortium, will distribute the nets to all 116 districts in six stages over the next six months, providing one net for every two registered people in each household. The campaign will also include a sensitisation programme to educate communities about the importance of sleeping under nets and how to use them most effectively.

“We are very pleased that the Ministry of Health has organised another universal coverage campaign and selected us again as the lead agency,” Malaria Consortium Uganda Country Director Godfrey Magumba said. “Large scale LLIN distributions are a key component to malaria prevention in Uganda. The campaign follows a successful universal coverage campaign in 2013 and 2014 which saw 22 million nets distributed across the country. The last campaign contributed to a major reduction in malaria prevalence in Uganda from 42 percent to 19 percent. LLINs are a highly effective, user-friendly and low-cost intervention to protect communities from malaria.”

Funding for the campaign has been mobilised by the Government of Uganda, the Global Fund to Fight Malaria, TB and HIV, Against Malaria Foundation, Department for International Development (DFID) and the USAID/President’s Malaria Initiative. Other implementing partners include the World Health Organization, UNICEF, PACE, Communication for Health Communities, UNBS, NDA and the Church of Uganda.