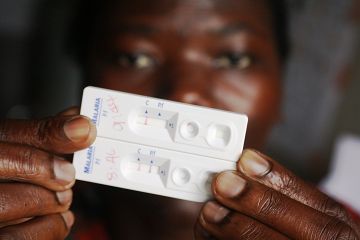 Malaria Consortium researchers were part of a team assessing Ugandan health facilities’ capacity to provide quality malaria testing, care and treatment and found high malaria testing rates among those suspected to have malaria. This was a notable improvement compared to previous years and met the target set by the National Malaria Reduction Strategic Plan to reduce morbidity and mortality. The study results were published in Malaria Journal.

Since 2010, the World Health Organization has recommended that all patients with suspected malaria should have their diagnosis confirmed by microscopy or a rapid diagnostic test (RDT) before treatment. Increasing use of malaria diagnostics like RDTs can positively influence treatment choices, lead to better treatment outcomes and improve the quality of surveillance and response of malaria.

Data collected in March and April 2017 in a cross-sectional survey of 1,085 public and private health facilities in 52 districts supported by the US President’s Malaria Initiative (PMI) also assessed the availability of malaria management guidelines, supportive supervision, and training health workers in the use of malaria rapid diagnostic tests (RDTs).

“We found the improvement in malaria testing rates impressive. Supportive supervision, like that provided through the United States Government (USG)-funded Malaria Action Program for Districts (MAPD) and having at least one health worker trained in malaria diagnosis using RDTs were statistically significant factors in testing at least 75 percent of patients suspected to have malaria. Our study results therefore underscore the need for malaria control programmes to provide regular supportive supervision to health facilities and train health workers in the use of RDTs,” said Dr Sam Siduda Gudoi, MAPD Programme Director, Malaria Consortium Uganda.

The researchers also found an 88 percent testing rate among private for-profit facilities – slightly higher than that observed among public facilities (84 percent). Similarly, the Uganda malaria indicator survey 2018/19 (population-based survey) indicated that children under five with a fever in the two weeks preceding the survey who had blood taken from a finger or heel for testing could go as high as 70 percent in some districts.

This study was made possible by the generous support of the American people through the United States Agency for International Development (USAID).  The contents of this report are the responsibility of Malaria Consortium and do not necessarily reflect the views of USAID or the United States Government.

Determinants of malaria testing at health facilities: The case of Uganda