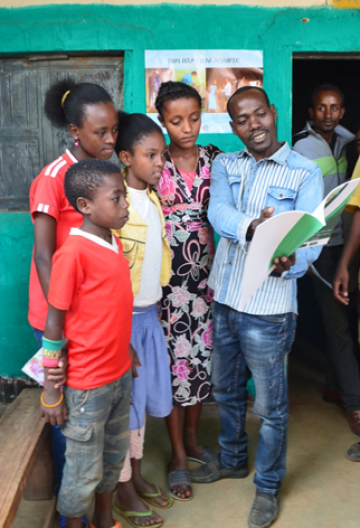 Malaria is one of the leading causes of sickness and death for children under five in Ethiopia, with the disease particularly prevalent in the Southern Nations, Nationalities and Peoples Region (SNNPR). In this region, in spite of the availability of insecticide spraying and mosquito nets, few people take advantage of these prevention methods.

Thanks to support from the James Percy Foundation, Malaria Consortium is able to help raise awareness about the importance of malaria prevention in these communities. One of the most successful ways that Malaria Consortium provides much needed support is via our anti-malaria school clubs and community based road shows both of which aim to improve understanding around the risk of malaria as well as community health seeking behaviour. By creating community conversation around the issue, people are learning to protect themselves from malaria better.

Children are among those most at risk of malaria. During a recent visit to the Achura Junior School, students talked about their experiences of malaria and explained how Malaria Consortium’s school clubs and roadshows have helped them and their communities stay free from malaria.

Messai Legesse, aged 12: “I have had malaria twice. I had a fever and a terrible thirst. I remember shivering and feeling very scared. My aunty took me to the health centre where they tested me for malaria. When it tested positive, they gave me anti-malarial drugs."

Addisalem Abraham, aged 13: “I have had malaria three times. The last time, I was at school and I really didn’t feel well. One of my teachers told me to go to the health centre to get tested. Since having the anti-malaria school club, I have learned how to use a mosquito net properly, and how to prevent mosquito breeding sites near my home. Malaria is a huge problem in my community. One day I would like to be a doctor so that I can help people here.”

Senait Belachew, aged 15: “I have had malaria once. I have two brothers and two sisters and they have all had malaria too. I learnt about how to prevent mosquito breeding sites at the anti-malaria school club, so now I help clean up the stagnant water in my community. Once I started attending the club, I understood why I had been sick and how to prevent it happening again. Before the school clubs and the community roadshows, we didn’t know much about malaria or how to manage it. People in the community didn’t realise that it was the mosquito bites that were causing malaria. Now we can help educate the others in the community about malaria and how to prevent it."

Tsedal Tesfaye, age 12: “I had malaria twice last year. Each time I worried about missing school, I did not want my grades to suffer. After I learnt about how malaria is transmitted, my family and I started sleeping under a net. All the information that I learn at the school club, I share with the community so that they can protect themselves."