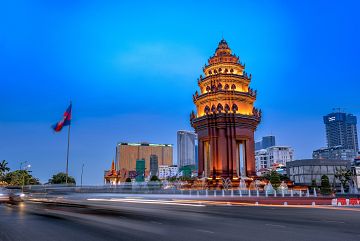 On 4 August, the first Post Ministerial Conference (PMC) was held in Phnom Penh, Cambodia, to draw up a Plan of Action to guide implementation of the goals and objectives of the Association of Southeast Asian Nations and the United Kingdom (ASEAN-UK) Dialogue Partnership following its creation last year.

Representatives from ASEAN-UK – a group of 10 countries in Southeast Asia including Brunei Darussalam, Cambodia, Indonesia, Laos, Malaysia, Myanmar, the Philippines, Singapore, Thailand and Vietnam – and the UK outlined their countries’ shared priorities across political, security, economic and global issues in an agreement over the next five years, including initiatives to strengthen and scale-up research and science linkages through the Dialogue Partnership.

Malaria Consortium has been engaged in disease control in Southeast Asia since 2003, targeting key health burdens including malaria, pneumonia, diarrhoea, dengue and neglected tropical diseases, along with other factors that impact on child and maternal health. Several areas of the ASEAN-UK’s Plan of Action overlap with work that Malaria Consortium is currently doing in implementation research, working with communities, government and non-governmental agencies, academic institutions, and civil society organisations in Southeast Asia.

Bacterial surveillance data has revealed a high burden of antibiotic resistance in Cambodia. In 2017, Malaria Consortium was part of a research team that studied the drivers of antibiotic resistance using a One Health approach – involving the Cambodian health, animal, agriculture and environment sectors. This approach, proposed by the ASEAN-UK partnership, is crucial to effectively address antimicrobial resistance, zoonotic diseases and other emerging diseases in humans, in animals and in the environment.

Mosquito-borne arboviruses such as dengue are rapidly spreading in Asia and a key public health issue across the ASEAN countries. Dengue can easily go undetected within communities, as many cases are asymptomatic and often not diagnosed correctly. Through dengue vector control projects, Malaria Consortium has promoted the use of guppy fish instead of chemical insecticides for control of Aedes larvae in water storage containers, as part of a package of vector control interventions. This was highly effective in reducing populations of larval mosquitoes. Malaria Consortium is now currently researching the use of indigenous fish species to replace exotic guppy fish, building capacity of local people to administer easy, low-cost solutions to health challenges.

One of the biggest issues in controlling the spread of arboviruses is the lack of integrated disease surveillance across the world. The challenge for countries in estimating the true burden of arboviruses makes it difficult to plan and implement interventions effectively. Later this year through the Resilience Against Future Threats (RAFT) Consortium project, Malaria Consortium will host African health officials in Thailand to interact with and learn from Asian counterparts about surveillance and response to arboviral diseases. The Asia Pacific Malaria Elimination Network (APMEN) Vector Control Working Group (VCWG) – co-chaired by Malaria Consortium – also provides capacity development to APMEN’s 21 member states by way of online and physical courses, webinars and a web-based information-sharing platform. These initiatives strengthen engagement on science and technology on regional priorities, an important goal of the ASEAN-UK Dialogue Partnership.

Professor Leo Braack, Senior Vector Control Specialist at Malaria Consortium and Co-Chair of Asia Pacific Malaria Elimination Network (APMEN)’s Vector Control Working Group (VCWG) said: “It is reassuring to see increasing support and collaboration by the UK government targeting Asia, which will host the bulk of human population and also the world’s biggest economy in the foreseeable future. It is a region that will almost certainly face huge challenges as a result of climatic changes, with subsequent consequences on health and the environment, and the response by this region will spill over globally. We are hopeful that much positive collaboration and mutual benefit can accrue from these initiatives to promote East-West partnerships, such as is being fostered by the UK government.”

The ASEAN-UK Partnership seeks to promote collaboration in research and development on priority health issues like dengue through its global research programmes, including by undertaking joint research to address growing health challenges and better preventing, detecting and responding to infectious diseases.