Radio to raise awareness about SMC campaign in Nigeria 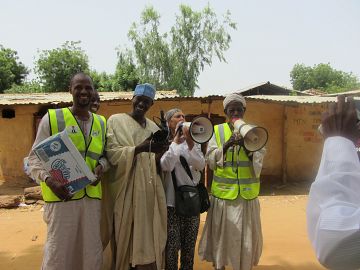 In 2015, the ACCESS-SMC project pioneered SMC delivery at scale, providing lifesaving preventive malaria treatment to 3.2 million children under five in seven countries across the Sahel.

In Nigeria ACCESS-SMC is being implemented in two states, Sokoto and Zamfara. The first round was implemented in 17 local government authorities (LGAs), from July to October 2015, with impressive results. The project reached a total target population of 792,133 with the highest recorded coverage from administrative results of 106% (840,392) and the lowest of 93% (736,858) during the monthly distributions, over four months.

In 2016, the scope will double to cover the entire 23 LGAs in Sokoto and 14 LGAs in Zamfara states, making a total of 37 LGAs. A kick-off ceremony will be organised in each state, to foster state ownership, and will be attended by policy makers and community leaders and covered by media reporting on state and national radio, and television reaching a projected three million viewers and listeners.

In addition, a key communication activity planned for the 2016 SMC campaign is the use of radio spots, discussions and phone-in programs. These radio programs will be aired before, during and after each of the four SMC cycles, helping to raise awareness among communities and promote demand for this lifesaving treatment. They will provide guidance to caregivers to ensure that children receive the full dose of treatment, while also explaining the purpose, benefits and distribution methods of the SMC intervention.

Given the popularity of radio as source of information, and the popularity of mobile phones in Nigeria, it is hoped that the radio phone-in program will work in tandem with other communication activities to provide a venue for clarification and immediate feedback from experts to caregivers.