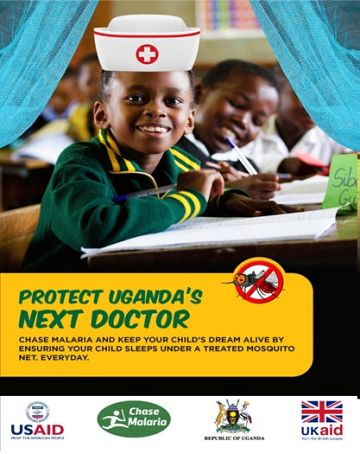 A new campaign to motivate caregivers to prevent malaria in Ugandan communities was launched today. USAID’s Malaria Action Program for Districts has designed the campaign strategy, which will disseminate malaria prevention messages through mass media and interpersonal communication channels.

The programme aims to reach at least 13 million people across 43 districts. “In its initial phase, the campaign is expected to reach at least four million people,” said Daudi Ochieng, Malaria Consortium Uganda Communications Manager. “Each year we will aim to increase its reach so that by 2021, when the programme ends, we have reached 13 million people with our social behavior change communications to adopt positive malaria control behaviours like sleeping under a net every night, reaching out to a health care provider within 24 hours of the onset of a fever, correct treatment of pregnant women and testing before treatment.”

The new communications strategy was created after USAID’s Malaria Action Program for Districts, led by Malaria Consortium, assessed current community-level knowledge, attitudes and practices on malaria prevention and treatment. The survey results highlighted knowledge gaps in malaria prevention and the high proportion of key health decisions being made by caregivers. It demonstrated a need for further mobilisation for protection against malaria and improved understanding of the disease’s impact. To address this need, the newly designed campaign takes a motivational and multi-pronged approach to engaging community members.

The campaign will be rolled out in three separate phases, focusing on ‘The costs of malaria’ in phase one, ‘Preventing malaria: nets and treatment for pregnant women’ in phase two, and ‘Test and treat’ in phase three. The campaign regularly places children at the heart of its messaging. A key motivator for caregivers to take preventive measures is to prevent their children from dropping out of school. Therefore, many messages will focus particularly on the impact of malaria on children’s education.

The communications campaign is part of the wider USAID and UK Aid-funded Malaria Action Program for Districts, which aims to prevent and control malaria morbidity and mortality and to minimise the social impact and economic losses on those affected by malaria. The programme will achieve this by supporting the Ugandan government on a range of other activities, such as net distribution, health facility staff training on malaria in pregnancy, diagnostics and case management practices. It will also provide capacity building of the National Malaria Control Programme and the districts health management teams on coordination and planning and Monitoring and Evaluaton.

The communications campaign will ensure 43 districts regularly receive and accurately retain information on malaria prevention. Filling the community knowledge gaps will have a multitude of positive flow-through effects, such as improvement in school attendance for children and in household financial security. “Through campaigns like this, Malaria Consortium hopes to empower communities to free themselves from the heavy burden of malaria,” said Dr Godfrey Magumba, East and Southern Africa Programmes Director.

USAID’s Malaria Action Program for Districts aims to improve the health status of the Ugandan population by reducing childhood and maternal morbidity and mortality due to malaria. The project will support the Government of Uganda for a period of five years, focusing in particular on children under five years of age and pregnant women. This project, made possible by the generous support from the American and British people, is implemented by Malaria Consortium in partnership with Jhpiego, Banyan Global, Communication for Development Foundation Uganda (CDFU), Deloitte Uganda and Infectious Diseases Institute (IDI).

Delivering nets at the last mile: Success through promoting a culture of net use