Spotlight on Malaria at House of Lords

London, 13 July: Members of Parliament, the private sector, the media, academia and the International NGO community came together yesterday at a reception at the House of Lords to acknowledge the new coalition govenrment's commitment to malaria.


The event was hosted by Lord Rea on behalf of the All-Party Parliamentary Group on Malaria and Neglected Tropical Diseases (APPMG), sponsored by Malaria Consortium and supported by Comic Relief.

The main aim of the event was to draw attention to the issue of malaria among new MPs and other audiences, with films and presentations form Comic Relief and Malaria Consortium to illustrate how much can be achieves in just a short perios of time.

"Malaria is a preventable tragedy that claims the lives of over 850,000 people a year, mostly women and children, Accelerating progress to tackle this disease is a priority for this government. That's why we will focus our support on high burden countries, on reaching those who are most vulnerable and on supporting the development of improved prevention and treatment that is effective across a variety of settings and populations."

Malaria Consortium Pioneer Project in West Uganda was made possible as a result of the incredible success Comic Relief had raising money for malaria and other projects during Red Nose Day 2009.

“The British public have spoken eloquently with their generosity in response to malaria that kills so many young and vulnerable – each death unnecessary in an age when effective prevention and treatment is possible for few pounds,” said  Sunil Mehra, Executive Director of Malaria Consortium. “We should also to thank the celebrities who visited our programmes and for highlighting the impact of this deadly disease on families in Uganda.” 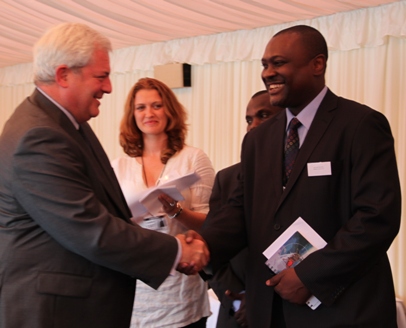 The Pioneer project aims to ensure effective prevention and treatment reaches those most at risk and vulnerable to malaria.  The project has a comprehensive approach to tackling malaria with activities including distribution of long-lasting insecticidal nets (featured on Comic Relief’s The Net Result over last Christmas), increasing access to treatment for children, and extending the use of rapid diagnostic tests for malaria through community health workers to ensure quicker and more appropriate treatment.

The burden of malaria across endemic countries, in Africa especially, is catastrophic. One child dies every 45 seconds of the disease and although everyone is at risk, the most vulnerable are young children, pregnant women and those with existing underlying health problems, such as malnutrition or anaemia. Uganda is one of Africa’s worst-affected countries, with 25-30% of child deaths attributable to the disease.

This year is an important year for malaria targets, with the 2010 Abuja Targets for Malaria, as well as the Millennium Development Goals reaching their 10 year point (just five more to go), with significant gaps in progress on health objectives up for discussion by world leaders in September.

Other speakers at the event included Jeremy Lefroy MP, the new chair of the APPMG, Kate Harrison, Portfolio Manager, International Grants at Comic Relief, and Mitra Feldman and Dr Anthony Nuwa from the Malaria Consortium Pioneer Project in Uganda.