Over 2.5 billion people – approximately 40 percent of the world’s population – are now at risk from dengue, with over 125 countries being infected annually. It is globally a neglected disease, yet causes a significant economic burden on the affected populations and there remains no vaccine or specific medication to treat it. Malaria Consortium has joined the Dengue Tribe campaign, a global social movement giving communities a platform to voice their concern about the threat of dengue and mobilise key stakeholders to address this disease.

The Dengue Tribe campaign was launched on 15th June to coincide with the Association of Southeast Asian Nations (ASEAN) Dengue Day and complements the work of the Break Dengue initiative. The campaign aims to collect the faces and voices of individuals and communities affected by the disease to reach national and international leaders urging them to cooperate addressing dengue and making it a public health priority.

According to the International Federation of Red Cross and Red Crescent Societies (IFRC), the direct and indirect costs of dengue on patients and their families can be up to triple their monthly income. In Southeast Asia, where 75 percent of the dengue burden takes place, the cost of dengue is estimated to be as high as US$2.36 billion. It is evident that the wider impact of this disease is grossly underestimated.

The Global strategy for dengue prevention and control, 2012-2020 aims to address a 30-fold increase in global dengue incidence over the past 50 years. The specific objectives are to reduce the mortality and morbidity from dengue by 2020 by at least 50 percent and 25 percent respectively.

Jeffrey Hii, Malaria Consortium's Senior Vector control Specialist has joined the Break Dengue Editorial Committee sharing his expertise and knowledge on dengue and malaria and some useful stories and interviews of his contacts in different professional networks.

"Dengue is so neglected that the disease burden has exceeded that of malaria”, Dr Hii concludes, "global partners need to do more to tackle this growing threat and combat the seriousness of the disease."

Watch the video below to learn more

And join us and help free our tribe from dengue. 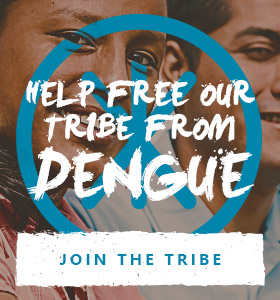 ASEAN Dengue Day: the rise of a killer disease