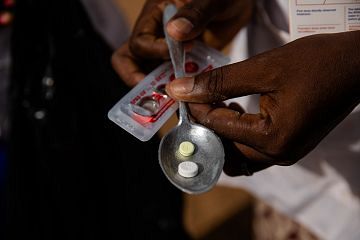 Malaria Consortium is pleased to announce the expansion of its seasonal malaria chemoprevention (SMC) programme to support implementation in Togo. Bringing extensive experience of SMC delivery, Malaria Consortium will support the government’s National Program for the Fight Against Malaria (PNLP) to deliver this highly effective, lifesaving intervention to around 180,000 eligible children in the Savanes region.

Togo has an estimated half a million children under five years old who are eligible to receive SMC, which involves administering four monthly courses of two antimalarial drugs to children aged between three and 59 months: sulfadoxine-pyrimethamine (SP) and amodiaquine (AQ).

Malaria Consortium has been a leading implementer of SMC since WHO issued its recommendation to scale up the intervention in 2012. Thanks to philanthropic funding received as a result of being awarded Top Charity status by GiveWell, Malaria Consortium will join existing partners Unicef and Global Fund to deliver cycles two, three and four in the Savanes region.

“Malaria Consortium is delighted about this new partnership with the national malaria programme in Togo and, alongside other partners, play a key role in strengthening the quality of SMC delivery. We are committed to supporting the country in protecting children from the devastating effects of malaria. As the 2020 SMC campaign is drawing to a close, we are already looking forward to supporting planning for the 2021 campaign.” Johanna Johansson, Togo Country Director, Malaria Consortium

In addition, Malaria Consortium plans to undertake an end-of-round coverage and quality survey in the three regions where SMC is implemented to allow the malaria programme and other SMC partners to reliably evaluate this year’s SMC campaign.

Malaria Consortium is uniquely placed as an leading implementer of SMC and led this rapid scale up through the Achieving Catalytic Expansion of Seasonal Malaria Chemoprevention in the Sahel (ACCESS-SMC) project in 2015–2017 – reaching close to seven million children in Burkina Faso, Chad, Guinea, Mali, Niger, Nigeria and The Gambia. Since 2018, Malaria Consortium has continued to deliver SMC in Burkina Faso, Chad and Nigeria and is on track to reach 12 million children in these countries under this year’s campaign.

Find out more about SMC.