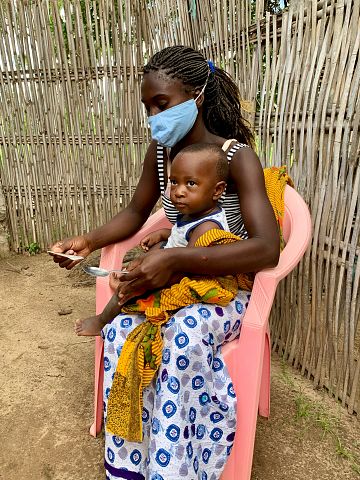 Mother administering SMC to her child

Malaria Consortium researchers, in collaboration with the National Malaria Control Programme in Mozambique, have undertaken a phased implementation study in Nampula province to understand if seasonal malaria chemoprevention (SMC) is a feasible and acceptable intervention to prevent malaria in children under five. The study also assesses the protective effect of sulfadoxine-pyrimethamine (SP) and amodiaquine (AQ) when used for SMC, as well as investigating the levels of molecular markers of resistance of Plasmodium falciparum to antimalarial medicines in the study area. Significantly, this is the first time SMC has been implemented in east and southern Africa. The study protocol was recently published in JMIR Research Protocols.

Malaria is a significant cause of morbidity and mortality in children under five in Mozambique. The World Health Organization recommends SMC, the administration of four monthly courses of SPAQ, to children aged 3–59 months during the rainy season. Because resistance to SP is widespread in East and Southern Africa, SMC has so far only been implemented across the Sahel region in West Africa.

This research will contribute to understanding whether SPAQ, when used for SMC, can confer a protective effect against malaria in children aged 3–59 months in a region where malaria transmission is seasonal and SP resistance is expected to be high.

The study targeted a population of around 72,000 children under five in two Nampula districts, as well as health workers and community volunteers who are involved in SMC implementation, caregivers of children aged between 3–59 months, local people, community leaders, and key decision-makers such as health officials at different levels of the health system.

In order to explore the acceptability and feasibility of implementing SMC in Mozambique, a qualitative assessment using key informant interviews and focus group discussions was conducted. The researchers examined how SMC is viewed, experienced and engaged with by different stakeholder groups, including policy-makers, implementers, affected communities and caregivers. Results from an end-of-round coverage survey have been published in a research brief. A subsequent phase will be implemented this year to provide a more comprehensive assessment of SMC’s effectiveness and the chemoprevention efficacy of SPAQ in the context of parasite resistance, the results of which will be published at the 70th Annual Meeting of American Society of Tropical Medicine and Hygiene by Dr Baltazar Candrinho, Director, Mozambique National Malaria Control Programme, in November.

“Given the potential of SMC to avert many malaria infections, it is essential to investigate the feasibility and acceptability of implementing SMC, including its coverage, quality and stakeholders’ perceptions, in potential new geographies such as Mozambique, which has one of the highest malaria burden in Africa and where SP resistance is expected to be high,” said Kevin Baker, Research Advisor at Malaria Consortium.