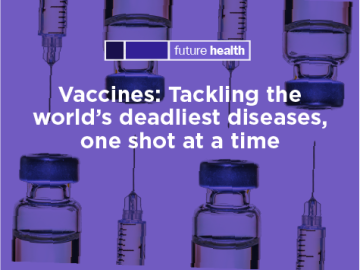 This World Immunisation Week, Malaria Consortium is delighted to announce the publication of a timely opinion paper on a key global health priority – vaccination.

The paper, Vaccines: Tackling the world’s deadliest diseases, one shot at a time, stresses the vital role that immunisation plays in protecting children (and adults) from vaccine-preventable illnesses – such as measles, diphtheria and tetanus – and urges prioritisation of development of a vaccine against malaria, a disease that costs an estimated 405,000 lives every year.

While a malaria vaccine is not a ‘magic bullet’, it would be an important addition to – and should not replace – the existing arsenal of preventive, diagnostic and treatment tools we use to fight this devastating illness. Malaria not only threatens billions of lives every year, but also has drastic socio-economic consequences for families, communities and economies; it plunges families into poverty, keeps children out of school and stifles economic growth.

As a leading technical organisation specialising in the prevention, control and treatment of malaria and other communicable diseases, Malaria Consortium fully recognises the immense value of immunisation to controlling and eliminating some of the world’s deadliest diseases. It believes that an effective malaria vaccine could help the world meet its target of eliminating an entirely preventable killer by 2030 – particularly crucial given the growing resistance to insecticides and antimalarial drugs.

In this opinion paper, Malaria Consortium urges the global scientific community to continue to prioritise developing vaccines for the two species of parasite responsible for the majority of malaria deaths (Plasmodium falciparum and P. vivax), and advises that the practical challenges of rolling out vaccines to remote and hard-to-reach communities are considerable but not insurmountable. The organisation cautions, however, that vaccine development should not come at the expense of the scale-up of already-proven malaria control measures, such as indoor residual spraying and insecticide-treated net distributions.

The paper also provides a helpful overview of malaria vaccine development to date, highlighting several promising vaccine candidates – including RTS,S/AS01, which is currently being delivered via national routine immunisation programmes in Kenya, Ghana and Malawi under the auspices of the Malaria Vaccine Implementation Programme.

While the paper itself does not make specific reference to COVID-19, Malaria Consortium believes it is imperative that the development of an effective malaria vaccine is not stalled during the pandemic. We also echo concerns raised by the World Health Organization that any interruptions in national routine immunisation schedules could threaten the decades of progress that have been made in tackling some of the world’s deadliest diseases.

Vaccines: Tackling the world’s deadliest diseases, one shot at a time is the second in Malaria Consortium’s ‘Future Health’ series, in which the organisation will use its expertise and experience of running health intervention programmes around the world to share its opinions on some of the biggest threats and developments in global health. Future publications will focus on climate change, dengue, and digital health.

To read Vaccines: Tackling the world’s deadliest diseases, one shot at a time, visit: https://www.malariaconsortium.org/resources/publications/1333/vaccines-tackling-the-world--s-deadliest-diseases-one-shot-at-a-time