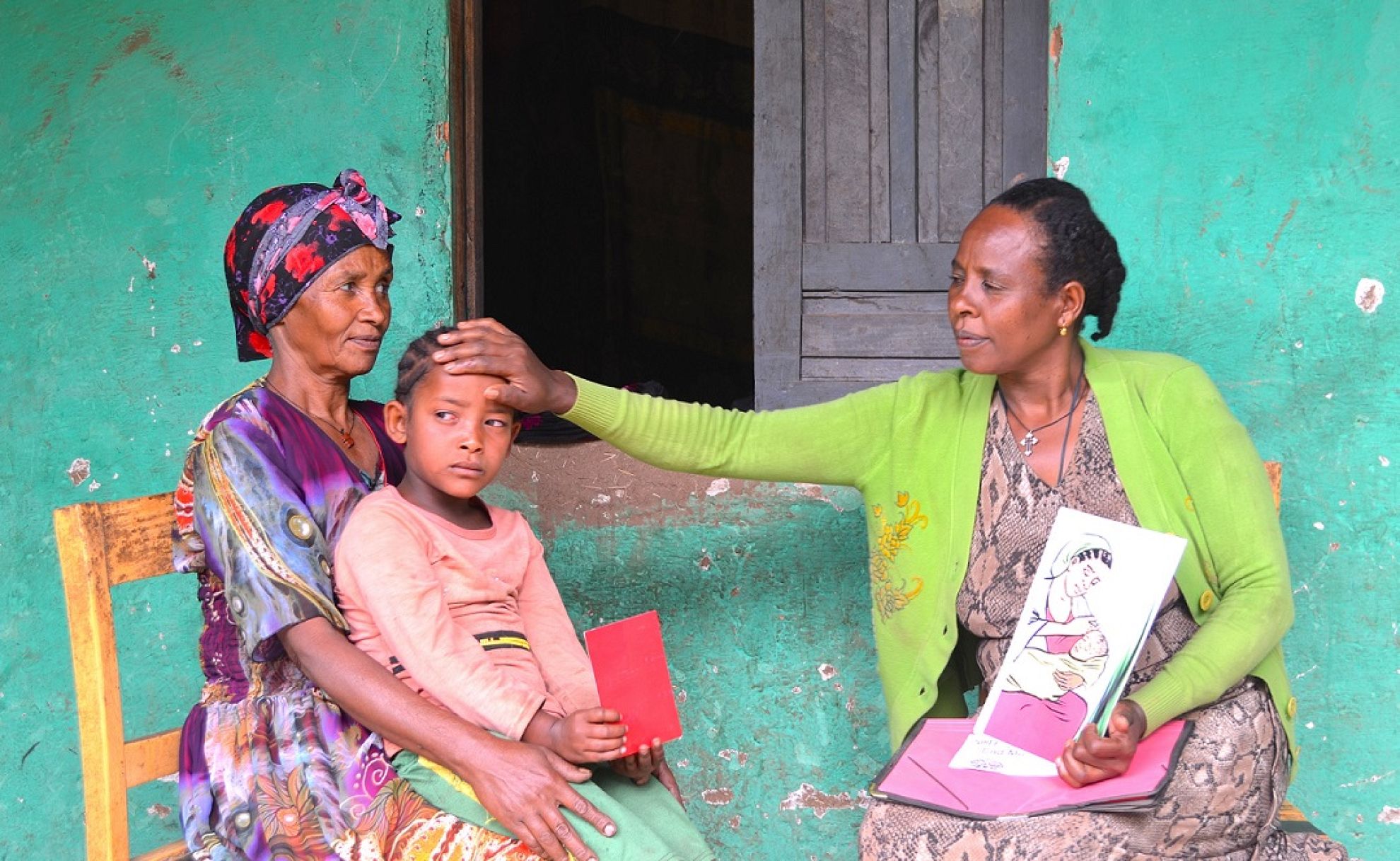 For people living in Ethiopia, where malaria is endemic, long-lasting insecticidal nets (LLINs) are an important tool for preventing malaria. LLINs, like diagnosis and treatment for malaria in public health facilities, are provided for free, but if communities are not effectively engaged, the full impact potential of these interventions on reducing the number of malaria cases will not be reached.

Although the primary health care system in Ethiopia has ensured a substantial expansion of health services in rural areas, there are still challenges, especially in recognising malaria symptoms, which has hindered seeking treatment early enough to prevent severe illness and in some cases, death.

In 2014, Malaria Consortium set out to improve malaria prevention awareness and early care seeking behaviour in the Southern Nations, Nationalities and People’s Region (SNNPR) of Ethiopia by increasing the effectiveness of existing community referral systems. The Integrated Community-based Interventions for Malaria Services (ICIMS) project, funded by the James Percy Foundation, has since contributed to improved use and effectiveness of community-based health services for over 507,000 people in the region.

The base of the referral system involves largely female volunteers from the Health Development Army (HDA), selected for their ‘role model’ status in the community, who help bring about local behaviour change by visiting the wider community to encourage good health practices. Malaria Consortium developed pictorial tools for members of the HDA, to identify malaria symptoms and danger signs. Going from door-to-door, the volunteers observe how families are using LLINs and use the danger sign tools to see if someone is sick and teach families about malaria symptoms. Anyone with signs of malaria is given a red card and referred to the local health post.

The danger sign tools were also provided to health extension workers (HEWs) who are in charge of health posts where patients come for diagnosis and anti-malarial medicines. Kedija Barato, a patient at the Ashoka Health Centre in Halaba, was lucky enough to have a motorbike to make the 20 minute-drive to the nearest health centre when her son began showing signs of malaria, signs she learned about from a HEW. For those without transportation, health posts offer diagnosis and treatment within walking distance. Selamawit Nigussie, a HEW who looks after over 2,700 people in her community, explained health posts are closer for people to reach, and ensures everyone with symptoms of malaria receive early diagnosis and prompt treatment.

As the community-based referral system has strengthened in southern Ethiopia there has also been a rise in early care-seeking and impact on malaria cases. “People very quickly now come to the health centre with fever and other symptoms,” said Abbu Ahmadin, Head of the Ashoka Health Centre. “In previous years, we would have over 20 cases a week. Now we have 3-4 cases a week and sometimes zero.”

Tekle Jafero, a District Health Officer in Boloso Sore, said, “For the last 35 years this district was well known for high malaria incidence. Hundreds of thousands of cases of malaria happened before. With the help of this project, the community is in better shape to protect itself from malaria.” He also spoke of how the project has encouraged higher levels of government to begin contributing to make further improvements in preventing and treating malaria, but that more still needs to be done. “This project is much appreciated. Taking this project to neighbouring districts would be a plus for complete prevention and control of malaria. If neighbouring districts are in trouble it will also affect Boloso. This is very essential.”

Behavioural change at the community level is an important investment in the fight against malaria. The ICIMS project has demonstrated that in communities where engagement has been accomplished, programmes designed to control and eliminate malaria can be successful. While it may be challenging to measure whether people in the community are changing their behaviour, such SBCC activities are believed to have contributed to the reduction of cases and infections. Malaria Consortium’s Country Director for Ethiopia, Dr. Agonafer Tekalegne, spoke about the significance of projects like ICIMIS in the fight against malaria. “Because we are at a tipping point in moving from malaria control to malaria elimination in selected districts of Ethiopia it is imperative that progress is not disrupted by lack in funding or acknowledgement in the importance of these invaluable SBCC projects.”