Dengue: a silent issue and a growing problem 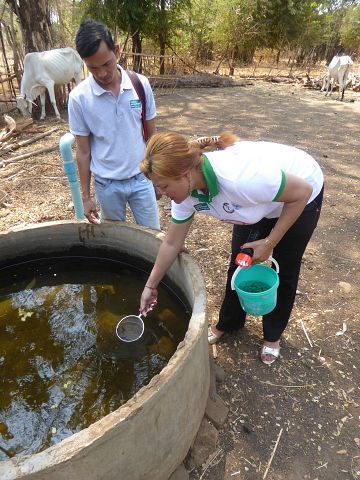 Dengue is one of the fastest growing infectious diseases in the world, spreading from nine countries to over one hundred in the past 50 years. The disease burden has grown from 15,000 cases per year in the 1960s to 390 million today.

Global attention to the disease has not kept pace with its growth. Classified as one of 17 neglected tropical diseases (NTDs), dengue disproportionately harms the poorest and most vulnerable groups yet does not receive the funding needed to defeat it. To find out more about this growing problem – including how dengue is spread and what is needed to defeat it – watch our animation.

Since 2003, Malaria Consortium has focused on a range of health burdens in Asia, including malaria, pneumonia, dengue and other neglected tropical diseases.

Recently, we have been looking into ways to reduce the mosquito population in Cambodia, where we run an innovative one-year project that focuses on the prevention of dengue by using guppy fish. We introduce these predators in water containers where mosquitos breed, in combination with other innovative approaches.

In Myanmar, which saw its highest ever recorded number of cases in 2015 with 120 confirmed deaths between January and September, we have just completed a one-year dengue project in Hinthada that looks at encouraging positive behaviours in communities to help fight the disease. And just last month, Malaria Consortium launched a study comparing two approaches to rolling out the revised national dengue prevention and control guidelines for health workers. The findings from the study will help to improve dengue prevention and control, especially by complete reporting of dengue cases and will contribute to the early and reliable detection of dengue outbreaks in the country.