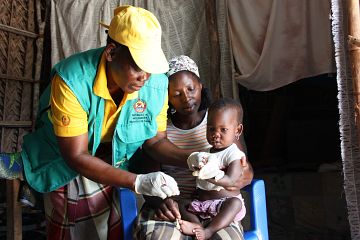 New research from Mozambique and Uganda has shown that effectively trained community health workers (CHWs) can reduce treatment costs for malaria and pneumonia among children under five in rural areas of the countries. The findings, published by a group of researchers from University College London, the Karolinska Institute, London School of Hygiene & Tropical Medicine, SINTEF Digital, Malaria Consortium and the University of New South Wales, were published in Malaria Journal in August 2022.

Globally, nearly half of all deaths among children under the age of five can be attributed to malaria, diarrhoea and pneumonia. 41 percent of preventable child deaths resulting from these illnesses occur in sub-Saharan Africa. Treatment costs are high, particularly if treated at higher-level facilities.

To date, costing studies have primarily focused on community or programmatic delivery, with few examining the costs of delivering case management within formal healthcare facilities. Given competing priorities of national governments and limited budgets available to mobilise the required resources for the integrated management of childhood illness programmes at the community and national levels, it is necessary to evaluate the costs, cost-effectiveness and affordability for community members.

This study addressed the gap in the current evidence base, estimating the unit costs of treating malaria, pneumonia and diarrhoea among under-fives as part of the Innovations at Scale for Community Access and Lasting Effects (inSCALE) trial. The inSCALE trial examined the best methods for strengthening community health worker supervision, performance and retention in rural areas of Uganda and Mozambique.

The researchers found that overall, the cost of treating malaria – whether complicated or uncomplicated – was the highest amongst the three illnesses, irrespective of the facility level in which it was treated. The lowest was for diarrhoea. In both Mozambique and Uganda, the cost of inpatient admissions was the highest for malaria.

“Timely diagnosis and treatment of malaria, diarrhoea and pneumonia is essential to avoid severe complications associated with these illnesses. One strategy to provide timely treatment for these conditions is via community health workers. This new research re-emphasises the value add of effective community-based approaches, by improving the availability of reliable and accurate diagnostic tools and drugs for treatment, along with supportive supervision for community health workers”, said James Tibenderana, Malaria Consortium Technical Director and member of the inSCALE study group.

The range of total costs varied by the size of the facility in both Mozambique and Uganda, and with the illness being treated. The greatest contributors to costs in both countries were drugs and diagnostics, followed by staff.

Maureen Nakirunda, Malaria Consortium Seasonal Malaria Chemoprevention Research Coordinator and member of the inSCALE study group added, “Mozambique and Uganda have some of the highest rates of malaria, diarrhoea and pneumonia in east and southern Africa. As the risk of severe illness and death  tends to be greatest for children living in households that are not accessing formal health services, it is pertinent that evidence on the role of community health workers is used to bridge barriers to access.”.

As one of the only international non-governmental organisations to be awarded Independent Research Organisation status, Malaria Consortium conducts high quality, rigorous operational, clinical, health system and health service-focused research across a range of geographical, socio-economic and cultural settings, using the findings and learning to develop and deliver evidence-based, cost-effective interventions and inform policy decisions at national and global levels.