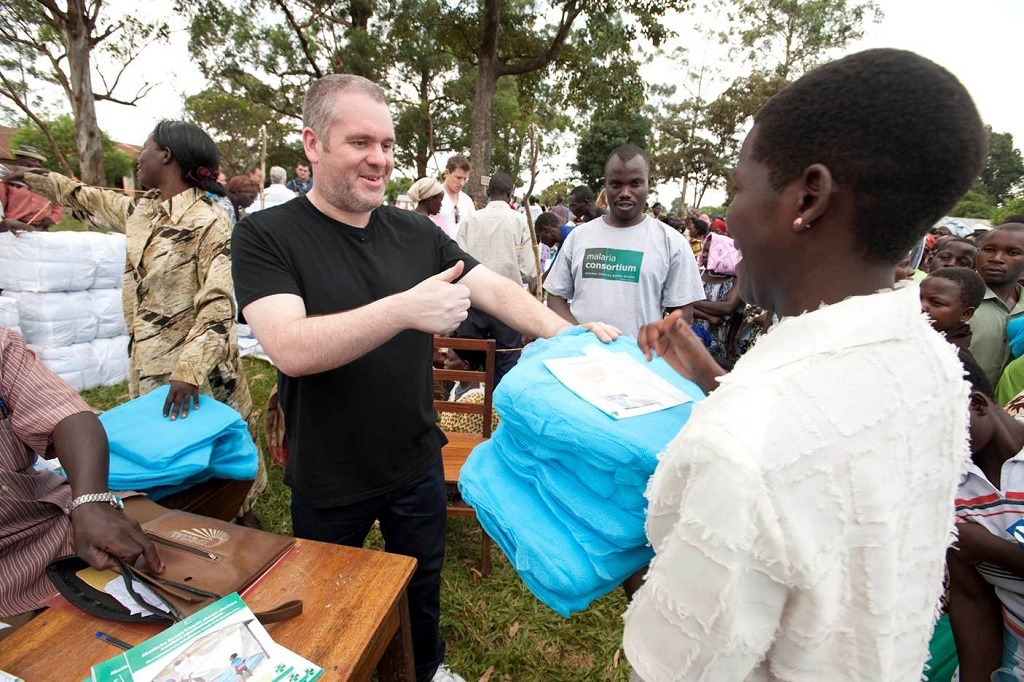 London 2 December 2009: Five celebrities - Ben Shephard, Chris Moyles, Fearne Cotton, Gary Barlow and Kimberley Walsh -  are visiting Uganda to lend their direct support to the start of a mass mosquito-net distribution campaign to help save the lives of thousands of children in Western Uganda.

The celebrities raised over £3.5 million from the UK public to help fight malaria by completing a gruelling climb of Mount Kilimanjaro last March. The money raised formed part of a massive fundraising effort by Comic Relief and was awarded to fund Malaria Consortium’s ‘Pioneer project’, a key part of which is the distribution of mosquito nets across Western Uganda. This week some of the celebrities returned to Africa and were thrilled to witness the result of their incredible efforts.

"Malaria Consortium is doing the most incredible job out here in Uganda," said Fearne Cotton. "Seeing the net distribution in action and handing them out to families knowing it could protect them from malaria was an amazing feeling. What's so brilliant though is that it is not just about handing out nets, it's also about educating people on how to use them. Seeing all this has made climbing Kilimanjaro all worth it!”

The Malaria Consortium Pioneer project is a four year project to support malaria control activities in four districts in Western Uganda; Kiboga, Hoima, Buliisa and Kibaale. It is being implemented through the Ministry Of Health and at national, district and community levels.

The distribution took place simultaneously across six sub counties in Hoima district yesterday and will take place across the remaining sub counties in the district before the end of the week. More than 330,000 long lasting insecticide treated nets (LLINs) will be distributed across Hoima district this week. LLINs will be distributed across other districts in the Western Region at the beginning of next year. All distributions will be conducted in coordination with the District Health Offices and National Malaria Control Programme (NMCP).

“The mass campaign distribution of LLINs is the first of its kind to target every household in Western Uganda,” said Connie Balayo from the National Malaria Control Programme (NMCP) . “In coordination with organisations such as Malaria Consortium, we are making good progress in getting nets to the Ugandan people although we still have some way to go. It is vital that everyone plays a part though to ensure we all use the nets every night.”

Mitra Feldman, Pioneer Project Coordinator, for Malaria Consortium, said: “The purpose of the Pioneer project is to increase rapidly coverage of life saving interventions that have a dramatic impact on malaria and the distribution and use of long lasting insecticide treated nets is a key part of this. We are pleased the distribution went so well and we hope people will really appreciate the critical importance of everyone sleeping under the net every night if we are to see a marked decline in malaria prevalence in Western Uganda.”

The team’s trip to Uganda is being filmed for a Red Nose Day report back show called Comic Relief: The Net Result which will be on BBC One on Sunday December 27th at 6.30pm.

See the highlights on the clip below

For more information, interviews with Malaria Consortium or photos, please contact Diana Thomas on 020 7549 0254 or d.thomas@malariaconsortium.org

Malaria Consortium in Uganda has been active since 2003 and now supports a large and diverse country programme. Malaria Consortium is instrumental in supporting the Ministry of Health and NMCP in the development of the universal coverage strategy and in testing its implementation. This will be the fourth LLIN distribution Malaria Consortium has conducted in Uganda this year; others have taken place across sub counties in West Nile and the Eastern region.

About Malaria in Uganda
In Uganda, malaria is the number one cause of morbidity and mortality. The disease is responsible for between 30-50% of outpatient attendances and more than 30% of inpatient admissions. Malaria is also endemic in Western Uganda, as it is in more than 95% of Uganda. The use of long-lasting insectide treated nets (LLINs) to prevent malaria is one of the major thrusts for malaria prevention in Uganda. If properly used and maintained, LLINs provide a physical barrier to hungry malaria-carrying mosquitoes which bite at night. The insecticide generates a chemical barrier that extends beyond the net itself and repels or deters mosquitoes from biting, or shortens the mosquito’s life span so that she cannot transmit malaria infection.