Celebrating success: huge wins in reducing malaria cases and deaths in Uganda as USAID-funded project comes to a close 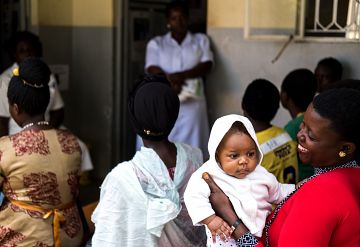 Malaria Consortium is today celebrating the successful close of the United States Government (USG)-funded Malaria Action Program for Districts (MAPD), having achieved impressive results in improving the health status of the Ugandan population by reducing malaria transmission, morbidity and contributing to a 49 percent national reduction in malaria-related mortality since the project began in 2016.

The five-year project aimed to reduce malaria-related childhood and maternal morbidity and mortality in 53 districts in the central, midwestern and West Nile regions. Supporting a total estimated population of 14 million people, MAPD centered around a Ugandan-led approach that promoted the use of data to improve surveillance and response and sought to strengthen the capacity of district health teams, with a particular focus on children under five, young people aged 18 to 30 and pregnant women.

“Malaria is the biggest burden of disease in this country; over 25 percent of outpatient attendance, 30 percent of admissions, amongst children especially, are malaria cases. Support from a partner to assist you with your biggest burden goes a long way in addressing your challenges.  In 2011, the prevalence of malaria was 42 percent, by 2014 it came down to 19 percent and now we are at 9 percent […] if you are covering 53 districts, around half the country, you cannot say that MAPD was not a big contributor to that improvement.” Dr Henry Mwebesa, Director General of Health Services, Uganda

With the support of the USG through USAID and the Centers for Disease Control and Prevention (CDC), under the leadership of Malaria Consortium, MAPD built on an established, positive relationship with the Ugandan Ministry of Health (MOH), district health teams and local communities to develop technical, leadership, and managerial capacity at all levels of the health system, with a focus on building the capacity of district health teams. The project supported the National Malaria Control Division (NMCD) and the district health management teams (DHMTs) to implement evidence-based, high-impact activities and supported malaria improvements beyond its project area, through national level capacity building, advocacy, and strategic collaboration, learning and adaptation.

“MAPD is a huge success story – and has contributed to a significant progress in malaria burden reduction. The building blocks of district level surveillance and response have been established – and this is critical for the country as we look to maintain an effective malaria response and also detect other diseases and threats that we are not yet aware of. If we are to eliminate malaria in Uganda, the approach taken by MAPD should be considered for other parts of the country where the burden of malaria remains unacceptably high.” Godfrey Magumba, East and Southern Africa Programmes Director, Malaria Consortium.

Across the 53 districts, MAPD has enabled the sustained and impressive improvement of key malaria indicators, increased access of malaria services for vulnerable groups, built coordination and managerial capacity for sustaining gains, supported innovative mechanisms for capacity building including for the private sector and strengthened links between district leadership, health facilities and communities.

As the lead implementer, Malaria Consortium forged effective collaborations with sub-partners; Jhpiego, Banyan Global, Communication for Development Foundation Uganda (CDFU), Deloitte Uganda, the Infectious Diseases Institute (IDI) and the Infectious Diseases Research Collaboration (IDRC) and stakeholders to maximise the generous investment made by the US Government through the President’s Malaria Initiative.