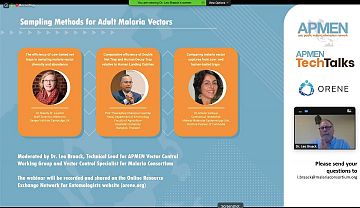 APMEN TechTalks is a series of webinars to provide a platform for discussing technical topics of interest and sharing information on ongoing research and implementation related to malaria elimination. APMEN’s three working groups – Vivax, Vector Control and Surveillance and Response – will be hosting the various webinars.

The first webinar was led by the Vector Control Working Group (VCWG) and focused on ‘Sampling Methods for Adult Malaria Vectors’, with three presentations. It was moderated by Dr Leo Braack, Senior Vector Control Specialist at Malaria Consortium in Bangkok and technical lead of the APMEN VCWG. The webinar drew an audience of around 100 participants from 39 countries.

The three presentations were delivered during the webinar:

The webinars hosted by VCWG will focus on vector control, which remains the most effective means for combatting malaria and is critical in our quest to eliminate the disease. Vector control is mostly done through the use of long lasting insecticidal nets and indoor residual spraying.

To implement effective vector control you need to know which vector species are present in your area, and their abundance. Historically, the “Gold Standard” for catching malaria vectors has been Human Landing Catches, but increasingly there is reluctance to using this method owing to the increasing risk of arboviral infections as well as ethical considerations. This inaugural APMEN TechTalk explored alternative ways to conduct vector surveillance, and the relative efficiencies of these methods.

Dr Braack will be hosting all of the webinars led by the VCWG. Malaria Consortium is a long-standing partner of APMEN, and has been an active member of the network.

A recording of the webinar is available below:

Links to the presentations can be found here.