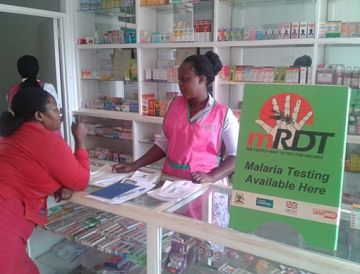 We are delighted to announce that Malaria Consortium Uganda has received an award at this year’s African Excellence Awards.

The African Excellence Awards were set up to acknowledge ‘the most outstanding achievements of communications and HR’. This year, our winning project is a UNITAID-funded private sector project, implemented by Malaria Consortium. The project created a private sector market for quality-assured malaria rapid diagnostic tests (mRDTs) in Uganda and Nigeria through a campaign aimed at improving health-seeking behaviour of community members. The campaign, which delivered tailored communications on malaria testing to communities and providers, recorded an increase of over 100 percent in mRDT sales and 38 percent in patients demanding an mRDT upon visiting a private health facility. In the project’s sales tracking reports, results showed that the average total monthly sales from all participating outlets increased from 4,500 to over 70,000 mRDT kits during the period, well exceeding the project’s target of 45,000 mRDTs

At the event, Daudi Ochieng, Malaria Consortium Uganda Communications Manager, explained: “Throughout the campaign, we used targeted messages to encourage active demand for mRDTs and to highlight the need for ‘testing before treatment’. Messaging reminded clients of the importance of testing to receive the correct treatment, and the importance of malaria testing as a first point of call in the case of a fever.”

Within the project design, an integrated marketing communication (IMC) approach was adopted. It incorporated advocacy, advertising, public relations, different marketing approaches, sales promotion and community mobilisation at product demonstrations. Health providers were trained on how to communicate with patients. The project also involved a local celebrity to endorse malaria testing, which increased community trust in the use of mRDTs.

This combination of techniques and outputs made for a highly effective communication strategy. As a result, this project contributed to improved health in many communities. Lessons learnt will be incorporated in future behaviour change communications campaigns in the country.