Distribution of 30 million SMC drugs underway in the Sahel 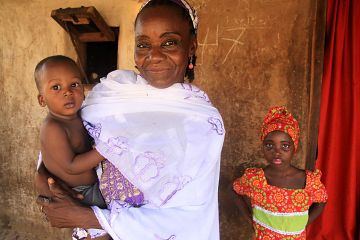 As part of the 2016 ACCESS-SMC campaign, more than 30 million SMC treatments will be distributed to over six million children, living in seven countries[1] across the Sahel region. Distributions have now begun in almost all of the ACCESS-SMC supported countries, and will continue until November. Guinea has completed its second cycle of distribution and has achieved 99% coverage. Burkina Faso, the largest ACCESS-SMC programme with 8.2 million treatments to administer, has also completed its first cycle, with a coverage rate of 89% and is now rolling out the second cycle. Chad, Mali and Nigeria are running the first cycle distribution.

“With the dispersible formulation, the children are more relaxed. They like the taste of the medicine and do not spit it out like last year. The new formulation is also much easier for the Community Health Workers to administer, as they no longer have to crush the drugs, add water and sugar before giving to the children, so it is less time consuming.”

At a WARN meeting held in July, WAHO stated that SMC is a valuable intervention for malaria control in children under 5 and that no significant resistance to SMC drugs is anticipated before 5 to 10 years. As a result, governments of SMC eligible countries are encouraged to rapidly scale up SMC interventions.

Take a look at the year one SMC campaign with this photo slideshow.