In late April 2016, I spent World Malaria Day in Bangladesh after being invited by the Director of Communicable Disease Control, Dr Shamsuzzaman of the Ministry of Health and Family Welfare. Malaria Consortium has been providing technical assistance and funding support to the Bangladeshi organisation iccdr,b to conduct a study in the Chittagong Hill Tracts areas regarding perceptions of health services. In addition, we have recently been in discussions as to where Malaria Consortium could best support the efforts of the government to control malaria, dengue and other neglected tropical diseases, especially focused in the border areas where malaria elimination needs to be accelerated to avoid artemisinin resistance crossing the border from neighbouring Myanmar.

It was a great privilege to be invited by Dr Shamsuzzaman, and we were happy to partially fund the event by providing $3,000 – funds that went towards travel for key government officials, renting of the venue, refreshments and the printing of key malaria materials.

It was a hot day in Chittagong, the second largest city in Bangladesh, with lots of people out and about on the streets for the World Malaria Day celebrations. Bands were playing and I participated in the parade and subsequent rally where indoor residual spraying was demonstrated. The slogan of the event was ‘end malaria now’, which was chanted from the crowd and by officials.

After the parade, a large crowd gathered for an outdoor meeting. There were several speeches about how there has been a great reduction in malaria in Bangladesh over the past several decades, with cases now confined mostly to border areas – particularly in the Chittagong Hill Tracts. Given this progress, the focus of the Ministry of Health and Family Welfare has become centred on eliminating malaria in the country. 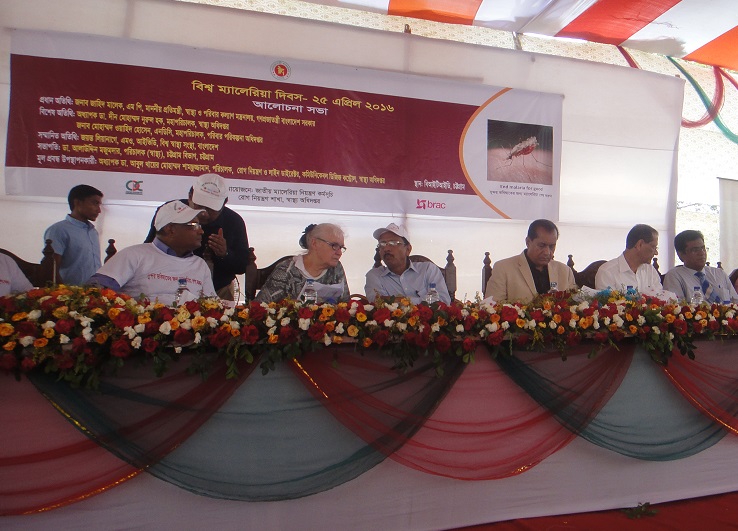 During the panel session of the rally, Malaria Consortium and BRAC – a Bangladeshi international development organisation – were the only two non-governmental organisations to speak. The Minister of Health made an appearance by Skype, and the Directors of Health and Family Planning were also present.

On behalf of Malaria Consortium, I presented the results of a research project in Bandarban that investigated the knowledge, attitudes and practices of community members, facility-based health workers and community health workers in relation to malaria and neglected tropical disease control. We are hoping to be able to work with the family planning division in Bangladesh to train peripheral level health workers to use rapid diagnostic tests for malaria and give out treatments to patients attending community clinics for primary health and antenatal care. We are also looking into possibilities that will allow us to expand into malaria, dengue and community-based care of childhood diseases.

I would also like to thank the icddr,b organisation in Bangladesh for supporting our visit on this important day.