Malaria is the leading cause of morbidity and mortality in Uganda, particularly among children under five who do not have access to good quality health facilities at the community level. Integrated community case management (iCCM) was introduced as a national programme in the country in 2010 to extend case management of key childhood illnesses, including malaria, beyond health facilities – increasing access to lifesaving treatment to more children. Since then, there have been challenges in scaling up this programme due to limited funding, capacity shortfalls and restricted stock availability of essential commodities.

Some of the key focus areas of SUMRES include our work with village health teams to implement iCCM activities within their communities, developing the capacity of private health facilities to deliver quality malaria services and input data into national systems. It also includes helping to improve integrated surveillance and data-informed decision making. In addition, social and behaviour change activities are playing an essential role in promoting health through community dialogues – health workers target the villages with the highest rates of malaria, emphasising the importance of malaria preventive measures, and support village health teams and local leaders to encourage their community members to sleep under long-lasting insecticidal nets (LLINs). Through the project, LLINs are being distributed to pregnant women during antenatal clinics and to children during immunisation.

Radio talk shows on malaria prevention have also been hosted by community leaders and popular local artists performed during World Malaria Day activities in April. Additionally, school health clubs have been established to support teachers to talk about malaria with students, reinforcing the messaging delivered through community dialogues.

SUMRES builds on the successes of Strengthening Uganda’s Response to Malaria (SURMa), a Malaria Consortium project which targeted 18 districts in Lango and Acholi. With new funding – secured for the SUMRES project until 2023 from the Global Fund to Fight AIDS, Tuberculosis and Malaria – we are supporting 11 of the 18 former SURMa districts in Lango and Acholi through SUMRES.

The previous SURMa programme ran between 2018 and 2021 and was prematurely ended following the withdrawal of funding from the UK government. Like SUMRES, SURMa focused on reducing malaria morbidity and mortality through improved use of data for decision-making. As a part of this previous project, Malaria Consortium developed the capacity of health workers to actively monitor malaria trends by routinely gathering data at the community level and uploading weekly data into the national system. We trained and mentored over 23,000 village health teams on the proper use of data collection tools and data-guided service delivery, and how to respond to malaria upsurges through test and treat outreaches. We also supported the Ministry of Health to integrate entomological surveillance into the district health information system for routine and timely monitoring.

According to the most recent Malaria Indicator Survey Report for Uganda (2018-2019), Acholi and Lango regions had the fourth highest malaria burden in Uganda, with a malaria prevalence among children between 0 and 59 months of 13 percent in Lango, and 12 percent in Acholi. 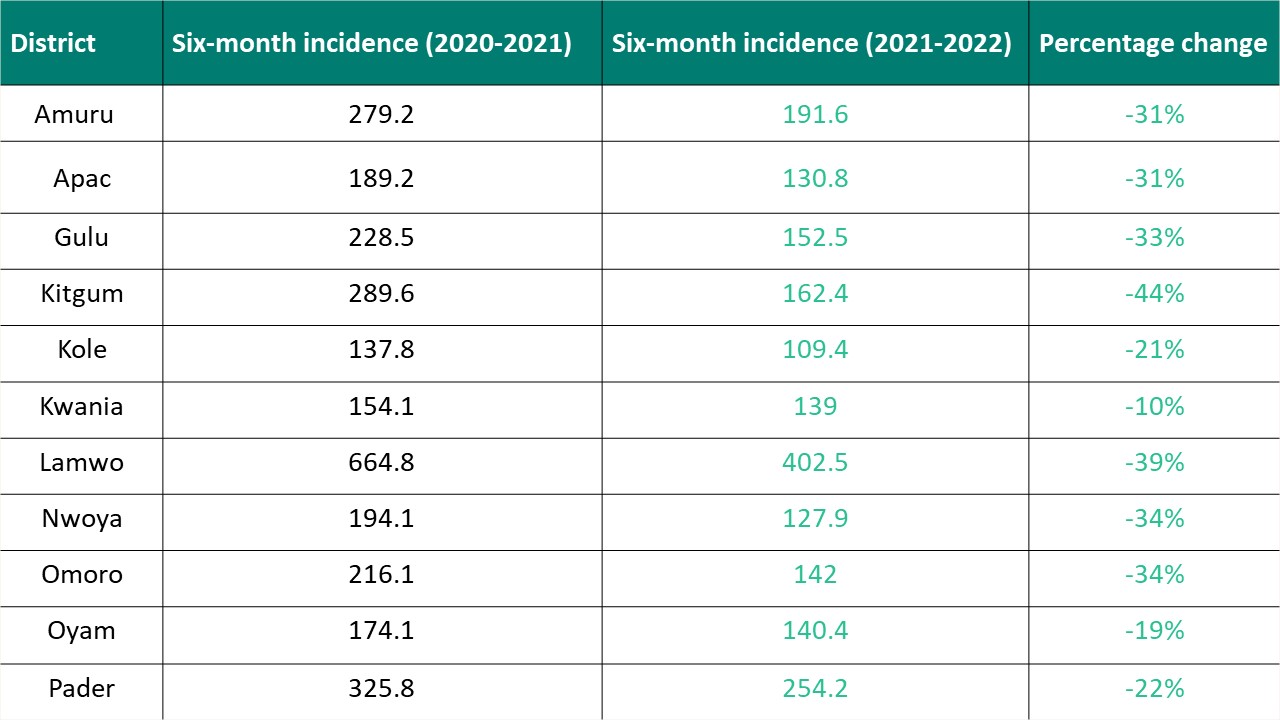 By contrast, following the early closure of SURMa in October 2021, malaria incidence rates have increased in 50 percent (eight) of the former districts where the intervention is no longer running, and rates are still going up.

Malaria incidence rates have significantly increased and are above 154 cases per 1,000 people in all districts except Amudat. In Moroto, the incidence rate increased to 527.5 cases per 1,000 people up from just 167 cases. In all districts where indoor residual spraying (IRS) was active during the SURMa programme and the programme has since closed – Kaberamaido, Dokolo, Otuke, Amolatar, Alebtong, Kalaki – the malaria incidence rate increased significantly (see Table 2 below). Further analysis is required in Amudat and Moroto since these are districts in which seasonal malaria chemoprevention is being implemented. 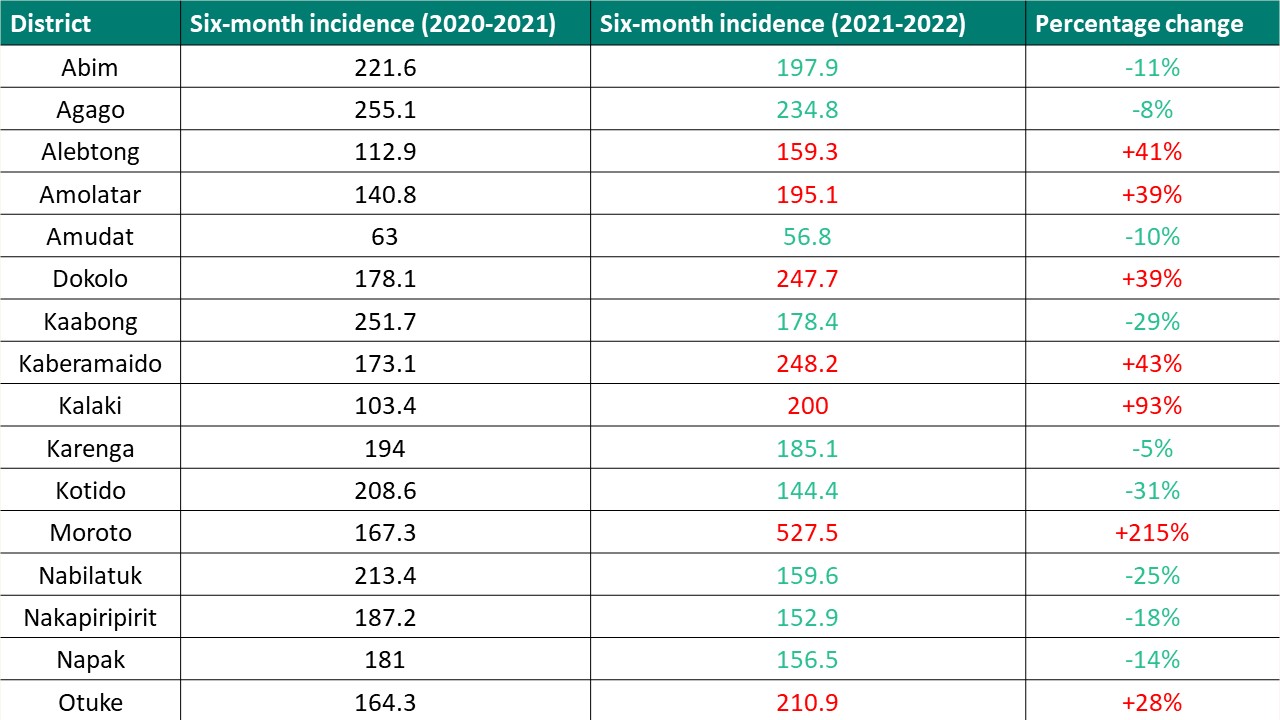 Comprehensive and holistic SUMRES project activities – including iCCM, capacity development and routine monitoring, surveillance and supervision at health facilities – will continue to strengthen health systems in the 11 districts the programme is active, and we hope will withstand new upsurges in malaria incidence. Quarterly performance reviews of malaria case management at district level have helped to build stakeholder engagement, as has the existence of Mass Action against Malaria Task forces. These task forces are multisectoral and are a forum to coordinate and galvanise efforts towards malaria prevention and control. The success seen across SUMRES districts can be attributed to district-led planning and examples of stakeholder engagement with technical leaders and key sectors beyond health.

Only through the continuity of implementation activities and the extension of these activities to all communities with high malaria burdens in the country can the gains made to reduce the malaria incidence become sustainable long term and the political commitments to eliminate malaria be realised. Malaria Consortium’s focus over the next few months will be to continue with school health programmes and target communities with high malaria burdens through test and treatment outreaches.