Sylvia’s contribution to the fight against infectious disease, and malaria in particular, through her own, and Malaria Consortium’s work, cannot be overstated. From her ground-breaking work as an entomologist to her high-level policy work, she placed Asia in the epicentre of this fight.

Originating from Hull in Northeast England, Sylvia had a passion for the environment and disease control that led her to study Zoology at Oxford and later Animal Parasitology at the University College of North Wales, Bangor, followed by a PhD in mosquito genetics and control at the London School of Hygiene & Tropical Medicine and Liverpool School of Tropical Medicine. Her research at the London School laid some of the early foundations for current work on what are now termed ‘Wolbachia-infected mosquitoes’.

Sylvia as an entomologist
One of her dear friends, Dr Jeffrey Hii, Senior Vector Control Specialist at Malaria Consortium, remembers sharing a laboratory with Dr Sylvia Meek back in 1979-1980 when she was studying the inheritance of susceptibility to infection with Brugia pahangi and Wuchereria bancrofti in the Aedes scutellaris group of mosquitoes. These were the days before the advent of DNA sequencing techniques, so laboratory crosses were complex. Nevertheless, Sylvia was later able to show from these laboratory crosses that geographical isolation has probably been a very important factor in speciation within the Ae. scutellaris group (Meek, 1988).

During 1985 to 1989, Jeffrey and Sylvia’s paths crossed twice. “Firstly Sylvia joined our entomological team in the Bone-Dumoga forest reserve, in north Sulawesi  during the 1985 Project Wallace expedition organised by the Royal Entomological Society of London and Indonesian Institute of Sciences (LIPI),” he recalls. “She assisted in larval collections which led to the re-description of An. (Cellia) sulawesi Waktoedi, a hitherto incompletely described species.”

“We then met again in Chiang Mai where Sylvia informed me of her new job as World Health Organization (WHO) malaria adviser for the antimalarial programme in the Solomon Islands. We both participated at a WHO Special Programme for Research and Training in Tropical Diseases consultation on forest malaria in 1989 in Chiang Mai, Thailand. Sylvia’s presentation on forest malaria formed the basis of her landmark paper on ‘Vector control in some countries of Southeast Asia: comparing the vectors and the strategies’ (Meek 1995[1]).”

Throughout her career, Sylvia kept research close to her heart, contributing her expertise to shaping the various studies conducted in the Asia region.[2]

“During the past two years in Malaria Consortium, I have had the pleasure to work with Sylvia in research about ways to improve access to interventions that have been shown to work but have not reached many of the people who could benefit from them,” Jeffrey says. 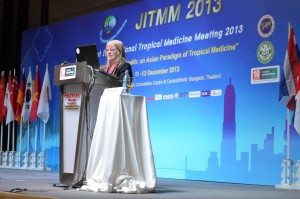 From research to helping refugees
Sylvia’s work with WHO took her around the world, during which time she gained the nickname ‘Mosquito Sylvia’. She also worked with the World Food Programme and the United Nations Development Programme, setting up and running disease control programmes for 200,000 refugees.

Dr Prudence Hamade, Malaria Consortium Senior Technical Advisor, another close friend and colleague describes this experience: “Sylvia worked in the refugee camps along the Thai-Cambodia border and although an entomologist she was soon diagnosing and treating malaria among the many patients there as well as doing her work and research into the entomology and providing protection for the refugees. During her stay there she had dengue at least a couple of times and has described to me how she lay on the floor of a hut with a high fever and had to get up and travel on the next day.”

Regional expertise and policy advice
Prudence continues, “She was instrumental in conducting the Cambodia malaria indicator surveys, the first of their kind in the Greater Mekong Subregion in 2004. In 2007 she supported both Thailand and Cambodia to develop their Global Fund bids and conducted Malaria Programme Reviews in Thailand and Myanmar to advise governments on how to improve their malaria programmes.

At WHO Technical Expert Group meetings, Sylvia provided well-thought logical arguments and brought the Asia view to the WHO Malaria Policy Advisory Committee (MPAC) which helped to drive some of the key policy changes related to malaria control and elimination in Asia. Through MPAC and drug resistance WHO regional meetings, Sylvia contributed to the recommendations of the treatment policies for Cambodia, a country particularly affected by multi- drug resistance. She was also an active member of the Emergency Response to Artemisinin Resistance (ERAR) in the Greater Mekong Subregion working groups.

“Sylvia’s impact on Malaria Consortium and our partners was, and continues to be, immense,” says Jeffrey. “She was an inspiration and everything we could ever admire in our profession and our personal lives. Sylvia’s values will be carried on by those she mentored, collaborated with and taught, and her inspiration has instilled a generation of malaria programme staff and entomologists in Solomon Islands, Greater Mekong Subregion, sub-Saharan Africa and elsewhere. She will be remembered for her subtle sense of humour, her enormously infectious curiosity and enthusiasm, her friendship and kind and generous nature.” 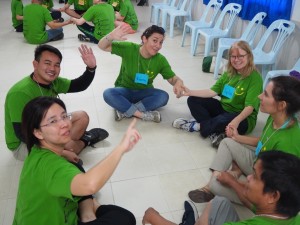